Michelle Cameron is the author of the new historical novel Beyond the Ghetto Gates. Her other books include The Fruit of Her Hands. She lives in New Jersey.

Q: How did you come up with the idea for Beyond the Ghetto Gates, and for your character Mirelle?

A: After I completed my first novel, The Fruit of Her Hands, I wanted to write another Jewish historical – but with a difference.

The Fruit of Her Hands, taking place as it did during the advent of antisemitism in medieval Europe, was filled with incidents of book burning, blood libel, trapping Jews in their synagogues and burning the building down, torture – you get the idea, I’m sure. (I should add that that’s not all the novel is about – as a family saga, there are plenty of lighter moments.)

But I really wanted to write about that rarest of beasts – a joyous Jewish moment in history.

It was when I was reading Michael Goldfarb’s nonfiction book, Emancipation: How Freeing the Jews from their Repressive Ghettos Led to Revolution and Renaissance, that I found the moment I was searching for. In it, Goldfarb described how Napoleon discovered the Jews of Ancona, Italy, were incarcerated nightly behind locked ghetto gates and how he dispatched his Jewish soldiers to demolish them. 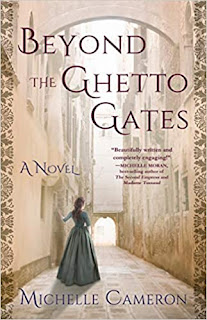 I’d been fascinated by Napoleon since my teens, but this was a story I’d never heard before. And it so clearly had “novel” written all over it!

Mirelle came about because I had to show how Napoleon’s actions would affect the people of Ancona – and to do so, I needed a main character whose life would change radically as a result.

Mirelle was a young Jewish woman who longed to be free of the restrictions not only of the ghetto but also of the confined traditional life of a Jewish wife and mother. Enlightenment philosophies had permeated Italy and, combined with the new freedoms Napoleon’s conquest would give the Jews of Ancona, they would have profound consequences for her.

A: I did a tremendous amount of research to write this novel, delving not only into history books, but into books about lifestyle during that time, including contemporary fashion, food, furniture, and, of course, philosophy. I love visiting museums, especially the Metropolitan Museum, not only to see the artwork of the period, but also to stand outside the beautiful period rooms they set up.

In fact, I’m now in the research phase for the sequel (more on this in a bit), and it’s reminding me just how much reading and pondering you must do before embarking on the writing.

In terms of surprises, oh yes, there were two in particular. The first was learning that Ancona was the world center at that time of ketubah (Jewish marriage certificate) making. The city artisans were the first to illuminate these certificates, and they were breathtaking.

Learning this gave me a passion for Mirelle that would conflict with the social expectations of her future. She wanted to further her family’s legacy, working in her father’s workshop and helping him manage it.

Another surprise that contributed mightily to the plot was stumbling across the miracle of a portrait of the Virgin Mary in Ancona’s cathedral.

According to a Vatican recounting of the event, Francesca Marotti and her daughter Barbara were the first to see the portrait turn its head, smile, and weep upon the congregants. The miracle was greeted by thousands of the faithful coming to the cathedral in candlelit processions, claiming they, too, had witnessed the miracle.

And I made use of a specific anecdote – that when Napoleon was looting the cathedral, something he saw in the portrait shocked him. He then took up a gold cloth, the story goes, enveloping the painting. I should add that after this incident, nothing that happens to the portrait is in fact true. But it was an amazing plot device and made a huge difference to the narrative.

Q: What do you think the novel says about the role of the Jewish community in this part of Italy during the late 18th century?

A: I think the Jews of this period – not just in Italy but in much of Europe – were faced with a significant dilemma.

The Jews of France had gained citizenship for the first time in millennia during the Revolution, which gave them all the protections and rights, as well as the duties, of their countrymen. Because the Revolution had done away with religion in entirety, they, like their Christian compatriots, were discouraged from following their faith.

So the Jewish community would have viewed the approach of French forces with a mix of trepidation and exhilaration. As I show in the character of the rabbi of Ancona, not everyone welcomed these new freedoms. Knowing where to draw the line between assimilation and retaining religious identity can be difficult, both on a social and individual basis.

Members of the Jewish community of Ancona, which welcomed Napoleon when he emancipated them from the ghetto, would be faced with making these tough decisions for themselves.

A: I particularly enjoy bringing unknown episodes of history to light, and this is certainly no exception! Most of my readers have commented that their knowledge of Napoleon is limited to when he took control of France and elevated himself to Emperor, and what happens to him and the world after that.

His military campaign in Italy – as well as the one that follows – are generally unfamiliar. And of course, that includes his involvement with the Jews of Italy. After he demolished the ghetto gates in Ancona, he would repeat this action in many other Italian cities, including Venice, where the ghetto was first conceived.

In addition, I hope that by learning about this period of history, my non-Jewish readers would gain a better understanding of the difficulties the Jewish people have faced, not just in the 18th century, but before and since. Being forced behind ghetto gates from sundown to sunup each day – to say nothing of the overt antisemitism they faced – was a cruel reality for these people for centuries.

Often, people who first glimpse the title of the book think I’ve written about Eastern European ghettos during World War II and are unaware that the concept of the ghetto had a long and widespread history. (And unfortunately, Napoleon’s freeing the Jews from the ghettos of Italy would not outlast him – once he was beaten, the pope retook control of Ancona, and the Jews were forced back into the ghetto. Italy’s ghettos would exist until 1870.)

A: As I mentioned above, the next chapter in Napoleon’s career is equally unknown to many readers, and that’s the period I’m researching right now. Napoleon embarked on a military excursion to Egypt and Israel to challenge the British in that region. In addition to his troops, he emulated his hero, Alexander the Great, and brought 126 savants – scientists, artists, writers, and others – with him.

This novel will continue Christophe and Daniel’s story, along with that of Mirelle, Dolce, and Francesca.

A: I enjoy talking about the novel, my research and its themes and am always delighted to zoom into book clubs and other groups. I’ve been doing a virtual tour with a number of Jewish organizations and would love to extend that conversation to non-Jewish groups, including church groups. I have my first event with an interfaith organization scheduled this coming January and would welcome others!

--Interview with Deborah Kalb. Michelle Cameron will be presenting her book (virtually) at the Bender JCC of Greater Washington on Dec. 1.