Catherine Thimmesh is the author and Melissa Sweet is the illustrator of the children's book Girls Think of Everything: Stories of Ingenious Inventions by Women, now available in a new updated version. Thimmesh's other books include Team Moon. Sweet's other books include Some Writer!, which she wrote and illustrated. Thimmesh lives in Minnesota, and Sweet lives in Maine.

Q: What led to this new version of Girls Think of Everything, and what's different from the original?

CT: Girls Think of Everything was first published in hardcover 18 years ago, and in paperback two years later. It has continued to find an audience each year — which, of course, is terrific. The publishing team at HMH asked if I’d do an update since we were approaching the 20th year anniversary.

Initially, I wasn’t very inspired to do so — mostly along the lines of: I’ve already done that book and would rather find new projects/subjects to work on. But my editor brought up the idea a few times, so I decided to revisit the book — thinking more in-depth about the content as it was, and what revising and updating it might look like.

I’m so glad I did! I’m very excited about the revision coming out in October – there are seven brand-new, fabulous stories of inventions and the women behind them – and Melissa Sweet’s art is (no surprise) phenomenal.

Q: How did you select the women to include in the book?

CT: It’s actually a tough process. I’m first looking for inventions that I personally find fascinating or incredible and also that I think young readers can relate to in some way and that I think they will also find intriguing on some level.

Deciding who to include is lengthy and fairly subjective. First, one of the things that was so appealing about a revision was being better able to represent diversity amongst women, which unfortunately was quite limited in the initial book.

Researching the original text in 1998, was an enormous challenge: it was pre-Internet, and pre-Google search, and women simply didn’t have much written about them generally — and women of color even less so.

It was extraordinarily difficult back then to find inventions by women of color: in general, but also that were kid-friendly and that I felt would be of interest to a young reader.

So, one of the joys in doing the revision was having a better research tool to find some amazing inventions by women of color and also by women outside of the U.S.

Q: What do you hope kids take away from this book, and is that different from what you hoped the first time around? 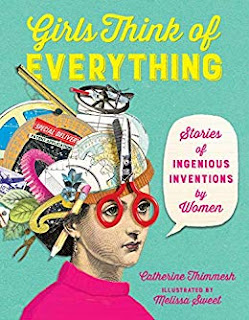 CT: At the end of the day, I am trying to highlight inventions and women who I think will inspire young readers in some way — particularly young girls — hopefully to come up with their own creative solutions to problems, whether through invention or some other means.

That said, I’m not super-particular about what readers take from the book — only that I hope they do find something of value they connect with and want to hold onto.

Ultimately, I hope readers will be inspired in some way to explore and nurture their curiosity and inquisitiveness about the world around them. And then go out into that world and create — and recognize that each person’s unique skills and creativity and ingenuity can contribute to the greater good, regardless of how large or small the contribution.

MS: I hope readers come away inspired to take an idea to a completed invention. Each of these “portraits” show that inventing something can take persistence, trial and error, yet the process is worth it. These inventions are making a difference.

Recently I found this quote:
"Scientific inquiry involves the formulation of a question that can be answered through investigation.
Engineering design involves a problem that can be solved through design."

Investigation and design is at the heart of this book, and the essence of making anything.

Q: Of all the women you discuss, are there a couple that particularly fascinated you?

CT: Well, the true answer is: all of them! But I’ll give an example of one of the new stories that I love. Trisha Prabhu invented ReThink (TM), an anti-bullying app that has garnered much media coverage and praise. She invented the app when she was 15 years old.

MS: Every story in the book is compelling, but I was particularly inspired by two young women, Anna Stork and Andrea Sreshta, who invented the LuminAID lantern.

Their process of seeing a problem, figuring out the solution by way of the criteria that needed to be met, led to inventing a solar-powered, waterproof, durable and lightweight light source.

I admired their humanitarian spirits and determination. Shortly after I did the art for this book I saw the lanterns in use during a hurricane in Houston.

CT: Several things. I’m working on a book for the very young (babies and toddlers); as well as several creative nonfiction projects for middle graders that I’m very, very excited about.

MS: In June 2019 I have a new book coming out by Kwame Alexander, How To Read A Book, which was a fun departure artistically. It’s vibrant, painted in neon, and the story inspired me to let loose.

Beyond that, Catherine and I have two more books in this new series, and I have more picture book biographies on the way. Every stage of a book is exciting, and I’m looking forward to doing the research for all of these projects.

CT: I think many people would be surprised to learn that a fair number of boys have told me they’ve read the book (the original) and really enjoyed it (always with the caveat that they don’t like the title).

If the utopia is gender equality (at least my utopia is), then it’s equally important that the boys learn about the amazing things women have accomplished and continue to accomplish on a daily basis. So go ahead and suggest the book to a boy. Tell him, the author says, “It’s OK if you hate the title — but I bet you’ll like a lot of the stories.”

--Interview with Deborah Kalb. Here's a previous Q&A with Melissa Sweet.
Posted by Deborah Kalb at 7:04 AM