Heather Dune Macadam is the author of the new book 999: The Extraordinary Young Women of the First Official Jewish Transport to Auschwitz. She also is the co-author of the book Rena's Promise, and her work has appeared in a variety of publications, including The New York Times and National Geographic. She lives in the Hamptons in New York, and in Herefordshire, England.

Q: Why did you decide to write about the first official group of Jewish women transported to Auschwitz?

A: Oh, that is such an amazing story in and of itself.

My first book, Rena’s Promise, mentions a beautiful young woman who had startling red hair who Rena saw get selected to go to the gas. Adela Gross was her name and she helped the sick and terrified girls onto the flatbed truck and comforted them on their way to die.

In 2012, Adela’s family contacted me after I left a candle and some stones at Poprad station in Slovakia, where the train originated, in honor of Adela’s memory. They saw her name on the memorial I had created and got in touch with me! And 70 years after Adela disappeared on the first Jewish transport to Auschwitz, they found out what had happened to her.

Suddenly, I was very aware that they had to be other stories out there. I wanted to find them and bring those stories together to try and bring their families peace.

But I also wanted to bring their stories to the world because they’ve been forgotten. No one ever mentions that the first Jewish transport to Auschwitz was all young women, 297 of whom were teenagers! It’s not in the general history books on Auschwitz or the Holocaust.

I think this is partly because they were uneducated, unimportant young women. Girls like Adela were just swallowed up by the tragedy and disappeared without any trace. They died without anyone knowing who they were and that’s why I want to tell their stories. I want them to be remembered.

The Adela story didn’t stop in 2012 either. When I met Edith Grossman (whose number was 1970 and whose story forms the narrative spine of 999) I learned that Adela’s surviving sister was Edith’s sister-in-law. I met Adela’s niece and nephew, and I have become an honorary member of the Gross family. In fact, I am going to Toronto for Edith’s great grandson’s bar mitzvah in a few days!

A: Slovakia is a small country, and when I arrived there for the first time my visit was remarked upon in the newspaper and I started to hear from people, all over the country. I was sent photographs of family documents and photographs of girls on the first transport. 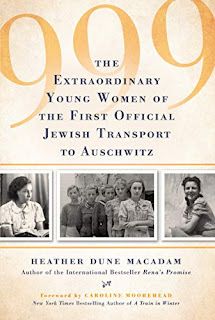 And witnesses! I don’t even remember how I found two of my main witnesses but they were in their 90s and remembered watching their girlfriends and classmates being rounded up. “The girls were the worse,” Giora Amir told me. “They were the first.” A precursor to the evil to come.

When Ivan described their faces with black streaks from mascara running down them, I saw these girls in a way I hadn’t imagined before.

I was incredibly well received by historians and scholars and supported in all of my efforts, even though I didn’t speak the language.

The first day I arrived at the Slovak National Archives, the researcher gave me two dictionaries and a stack of three enormous boxes full of documents. I had 12 to go through. I wasn’t always sure what I was looking for, but I found incredible materials nonetheless.

And this book is made up almost entirely of primary research that I found in the Slovak National Archives, with the help of scholars at the Museum of Jewish Culture in Bratislava, who showed me documents about the starvation diet protocols implemented on the girls, how much the Slovak government paid to get rid of their Jews, and the propaganda newspapers proclaiming how well the Jews were being treated in their new homes.

The Hartmann family told me there were postcards that had been written between their family in Slovakia and a cousin in Auschwitz, who worked for a top member of the Gestapo. I found the cards in the archives of Yad Vashem and at the Museum of Jewish History in New York City.

They are fragile and torn, yellow with age. Some of the stamps have Hitler on them. Some have President Tiso of Slovakia.

The writing is all in German and reveals such naivety about the situation in Auschwitz. The family in Slovakia complains that their daughters don’t write as often as they should and the cousin who writes back has to use coded phrases. That story is so amazing and shows us a glimpse into real life that is rarely touched on in history books.

One of my favorite quotes from Edith is about how they were teenagers - because it had never occurred to me that they were the same as any modern teenager! “We were still young enough to want to throw temper tantrums, to be lazy, to shirk a duty or sleep late.” 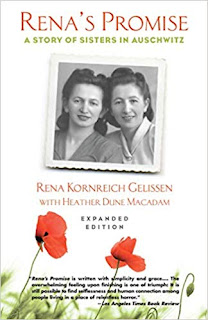 The infinite cruelty of imprisoning these young women and treating them like slave labor and worse—they did not have the value of being a slave. No one bought them. They were sold, like cattle, to the slaughter. That’s horrible! How do you recover from that?

I am very moved by the survivors’ statements that I collected at the end of the book and also their children’s revelations. This is a book about slavery. That is often what we forget about when we speak about the Holocaust. The focus on genocide is important, but let’s not forget that this was slavery.

You know Edith was giving a talk at her synagogue for Yom HaShoah and she asked someone if they were going to come hear her. The woman said, “I know all about the Holocaust.” Edith said, “Really? I was there and I don’t know everything about it.”

It is easy to shut off and turn away from horror, which is why I try to also focus on the positive aspects of human nature. Not a single girl would have survived without the kindness and help of one of her friends, sisters, or a kind doctor or nurse. We have to remember that.

Q: In the book's foreword, Caroline Moorehead writes that almost 1,000 young Jewish women were transported from Slovakia in the spring of 1942, very few of whom returned. What do you see as the legacy of these young women?

A: This is a historic #MeToo story. Women have been used as a “clever” weapon of war for millennia. It was no different during the Holocaust. It is no different today; look at the Yazidi and Kurdish women of Iraq, the Nigerian girls kidnapped by Boko Haram. Genocide always seems to begin with women.

Enslaving women is tantamount to warfare. And as long as women and girls are kept vulnerable and treated like chattel or possessions, we will continue to be used and abused.

For me, Never Again means justice for all women in the world today. Never Forget means Remember the Girls.

Q: What do you hope readers learn from this book?

A: I hope they fall in love with these girls as I have. I am so in awe of their humanity.

They weren’t all saints. Some of them did some fairly nasty things to survive, others struggled and suffered but refrained from perpetrating abuse on others—I am fascinated by all of those aspects in human nature.

Who would you be? Would you help or hurt? Would you sacrifice yourself for another? Would you go bravely to the gas or be terrified? Would you risk your life to help someone else? These are not easy questions, but they were questions Edith and her friends had to ask every single minute of every single day.

A: Oh… I don’t like to talk about things before they are committed to, but I will say that I have started pre-interviews and research at the U.S. Holocaust Memorial Museum on a very powerful World War II love story with a Holocaust dimension.

Meanwhile, I am actually producing a documentary about 999 and the first girls in Auschwitz. Believe me, I would rather be writing! Fundraising and editing footage is much tougher than writing a book!

I want 999 to reach a reading and viewing audience though. I want people to see Edith and Eta, to meet Ivan and Giora and hear their voices. I want everyone to know the children of these women who carry their spirits in them today.

My hope is that the documentary will receive a theatrical or television release and then be used in schools to help educate young people about the first women, so girls today can take courage in their own strength and fortitude. If these teenage girls could survive Auschwitz—what can’t other teenage girls do?

A: There were times when I was sitting at my desk that I felt like the girls leaning over my shoulder reading what I was writing. I get chills just saying that now. These were always benevolent spirits and as I wrote, often crying as I wrote, I would feel this incredible tenderness and gratitude.

I couldn’t find out everything about everyone, but I did the best I could, and I hope that their spirits touch my readers as deeply as they have touched me.