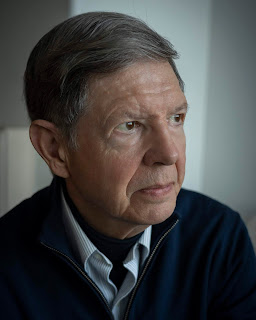 Robert McCaw is the author of the new mystery novel Off the Grid, the second in his series featuring Detective Koa Kane. He practiced law in Washington, D.C., and New York City, and he lives in New York and Hawaii.

Q: This is your second novel featuring your character Detective Koa Kane. Did you know you'd be writing another book about him before you started the first one?

A: I started my first book, Death of a Messenger, more than 20 years ago and wrote off and on as my busy legal career allowed. A second home on the Big Island of Hawaii had afforded me respite from the outside world, and its stark contrasts were fertile ground for my creative juices.

It wouldn’t be fair to say that in the beginning I knew I would write a second novel. But not surprisingly, that was my dream and in choosing the setting and fashioning the characters, I certainly allowed for the possibility of a second, third, or even fourth book.

And, as I progressed to the editing and production stages, the thought of deepening and adding to my cast of characters proved inspirational. Writing fiction was just too much fun to abandon.

In addition, I became attached to the characters. I began to see more complexities in their nature, and I developed more backstory. These figments of my imagination became friends - friends whose exploits I wanted to share. 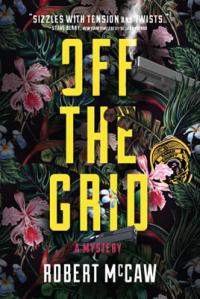 Q: How did you come up with the idea for Off the Grid?

A: The original inspiration for Off the Grid came from a painting my wife and I commissioned from an artist who lived in a remote part of the Big Island in a rather ramshackle house deep in a rain forest. Entering her home, cluttered with mismatched bric-a-brac, art supplies, and partially finished paintings, was a hoarder’s wonderland. I knew immediately that the house held secrets whose stories I could tell.

The artist, a talented but eccentric painter, rendered nature in exacting detail and was for me a character in waiting. Learning that her husband had some sort of clandestine military background made the pair a writer’s dream.

When living on a rural island in the middle of the Pacific, local news travels fast and, if nefarious, with lightning speed. So, when a small country restaurant we frequented closed after authorities arrested the proprietor as a fugitive from justice, it piqued my curiosity.

After pouring through old newspaper archives I realized the restaurateur was not the only wanted man hiding out in the backwaters of the Big Island. Other refugees from justice had been apprehended after living for years in remote corners of rural Hawaii.

The chance coincidence of these two occurrences in quick succession led me to the first inklings of a story about two fugitives, an artist and an ex-military orchid grower, living in a remote dwelling off the grid.

Q: The novels are set in Hawaii. How important is setting to you in your writing?

A: In some ways, Big Island of Hawaii is the most important character in this series of mystery/thrillers. The human characters and stories in my novels are informed by the island’s unique history, multicultural population, language, and blended aloha culture. 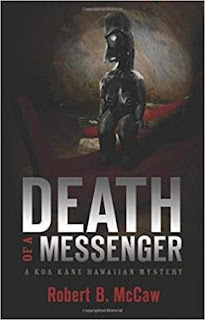 Koa Kane, my native detective protagonist, was indelibly shaped by the sugar cane plantations that crippled and killed his father. He, like all native Hawaiians, has enormous respect for his indigenous cultural history and divinities, the foremost of which is Pele, the legendary goddess of Hawaiian volcanoes, who built and continues to build the island.

He feels the pain of the activists who still chafe under the United States’ theft of Hawaiian sovereignty in 1893. And, when Koa takes his place in the second seat of a double-hulled ocean racing canoe, he, like his ancestors, is one with the ocean that surrounds the island.

Other characters reflect the diversity of the island—the Chinese, Japanese, Korean and Philippine laborers brought to the island to plant and harvest the sugar cane and pineapple crops; the Portuguese engineers who built the irrigation systems; and the Spanish and Mexican paniolos who tend the cattle on some of the biggest ranches in the world.

Finally, the plot arises in part from the setting. Where else can a loner hide from their past, and wind up tortured to death and nearly buried beneath an active lava flow?

Q: What are some of your favorite mystery novels?

A: I read a lot of mysteries and thrillers and am especially fond of those with unique geographic settings. Jane Harper’s books like The Dry and The Lost Man, set in the Australian outback transport me to the hot, dry, windblown flats of the rural land down under. I live in New York City and know it well, but in books like Terminal City, Blood Oath, and Hell’s Gate, Linda Fairstein leads her readers on an exploration of the secret places we walk past every day.

On a lighter note I love to go to rural France with Martin Walker. I can almost taste the cheese, the roast duck, and the wine in books like The Dark Vineyard and A Taste for Vengeance. No one does Wyoming like Craig Johnson or Mississippi like Greg Iles.

A: I’ve completed the third book in the Koa Kane series, Fire and Vengeance, which Oceanview has agreed to publish in 2020, and I am working on a fourth which will delve deeply into Koa Kane’s troubled past. After that, who knows.

A: For me, writing fiction posed a significant transition. As an attorney, my positions, briefs, and arguments were always more or less constrained by the provable facts. An attorney who strays too far from the record loses credibility with the client, the opposition, and the court. Not so the novelist.

However, it takes a substantial shift in attitude to exercise the full freedom to tailor facts to suit my stories and, if need be, to make whatever corrections are necessary to those that may not fit with the ending. But the freedom is liberating.