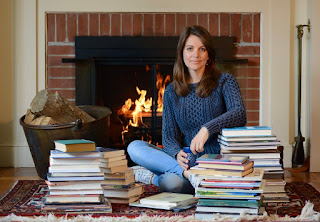 Anna Crowley Redding is the author of the new young adult book Google It: A History of Google. She previously worked as a television investigative reporter and anchor.

Q: Why did you decide to write a history of Google?

A: The idea for this book was the brainchild of my amazing editor, Holly West. When we first talked about the book idea, her enthusiasm and insight was so magnetic and so smart. I jumped at the chance! Google’s story is fascinating.

And I knew immediately that I wanted to approach the book from a trip in a time machine to re-visit the hilarious state of affairs before Google came into being!

A: When I research, the first thing I do is read as much as humanly possible on any topic. Books, articles, interviews, whatever I can get my hands on. And then I pick up the phone and start calling people who touch any part of a subject that requires a deeper understanding.

There were so many things that surprised me and fascinated me about Google. One of the aspects of the research that I loved was talking to people who used Google’s technology in a life-changing way.

Like the first driverless car passenger, a man who is legally blind. To be able to get into a car and go wherever you need to is something that I personally take for granted day in and day out. 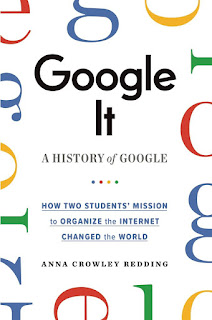 After talking to Steve, whose story is featured in the book, it was really touching to think about what that first car ride was like for him and what driverless car technology offers to people who have not been able to independently use a car to go to the grocery store, the park, a doctor’s appointment, or the beach. That is very exciting.

Another story stood out, a teenager from Cameroon who taught himself how to code. He hit the library to learn everything he could about artificial intelligence, and then entered Google’s Code-In Challenge and won! That’s despite a lack of regular access to the Internet.

So there is a pattern in these stories; they are the human stories behind technology. And I love that!

Q: What do you hope your readers take away from the book?

A: My greatest hope is that readers will feel empowered. Just because something doesn’t come easy, doesn’t mean you aren’t good at it.

There is a pervasive theme in Google’s story: fall in love with the problem and not the solution. That, for me, was a life-changing lesson from the book. It frees you up to shoot for the moon and fail over and over again, because you are focused on solving the problem and not becoming super attached to any one attempt to solve it. That’s fun.

I also hope that teens who read this will walk away understanding that we are living in a time of enormous technological innovation and we have to train ourselves to think critically and to be flexible. It’s an exciting time to be alive.

The NSTA named Google It! a Best STEM book of 2019. That just thrills me to no end because I know these teachers will make sure the book and ultimately the book’s message will get right into the hands of their students.

Q: What do you see looking ahead for Google?

A: Google (and parent company Alphabet) is such a dynamic company, going in so many different directions. There are some big problems to solve right now on the planet (and beyond) and Google is tackling a lot of them.

With any tech company, when I look into the future, I think about artificial intelligence. In some respects, Google has a natural advantage because of search, which is basically a massive amount of data.

So what can massive amounts of search data, location data, video data, etc., etc. mean for the development and practical application of AI? That’s such an interesting question to think about.

One of the greatest challenges I think tech companies of all kinds face today is how to step out of their bubble and take a look at their various projects with fresh eyes and ask those tough questions about unintended consequences of any particular advancement. It can be difficult to accomplish this perspective, but is doable and important.

A: 2019 is already a busy year! I am working on a biography of Elon Musk! Talk about a dynamic and fascinating subject. The book, Elon Musk: A Mission to Save the World, will hit bookstores on July 2, 2019 and is available for pre-order now.

Like my book about Google, this book is a look at the man behind Tesla, SpaceX and all of his other endeavors. Readers are going to love getting to know Elon better and understanding his journey from his native South Africa to California.

In addition to Elon’s story, I have a picture book coming out in 2020 from HarperCollins. This tale centers on a long forgotten story of heroism from the War of 1812.

Did you know we almost lost all the documents that built this country? I mean the Declaration of Independence, the U.S. Constitution, the Articles of Confederation, General George Washington’s journals, and more!

But one man, a lowly office clerk at the State Department found the courage to lead an effort to saved them all! The book is called Rescuing the Declaration of Independence and is illustrated by supertalent Edwin Fotheringham, who I am still beside myself to be working with!

A: More good news to be announced soon : )