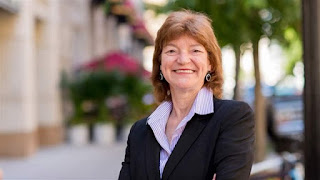 Elaine Povich is the author of the new book John McCain: American Maverick. Her other books include John McCain: A Biography. A longtime journalist in Washington, D.C., she has worked for a variety of news organizations, including Newsday and Stateline. She is also an adjunct professor of journalism at the University of Maryland.

Q: Why did you decide to write this new book about Senator John McCain?

A: It seemed like an appropriate, if sad, time to put together the story of his life. He was in the news because of his outspoken opposition to President Trump, and his illness brought his remarkable life into sharper focus.

More broadly, it seems like this is a time when actual heroes are in short supply in the United States. People may disagree on his positions on policy, but there’s no mistaking his dedication to serving his country.

Q: The book includes many photographs documenting McCain’s life. How were the pictures selected?

A: I have to give photo editor Christopher Measom nearly all the credit for selecting and editing the pictures. 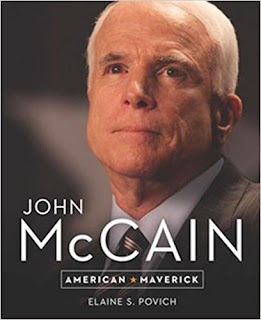 But we were trying to depict both the arc of his life and snapshots of some of the most important times. We wanted to show him in many different situations and many aspects – his childhood, the Navy, serving on Capitol Hill and running for office.

Of course, his family was included throughout. We strove to find some rare photos that may not have been widely shown before. And if we had some simply great shots, they were put in the book as well!

A: I think if you break apart those two words, they may say more than they do together. “American,” because his life is about country first. And “Maverick” because he’s always done things his own way. So putting them in a phrase shows a man who is devoted to his country but shows that devotion with individuality. That’s John McCain.

Q: Given today’s political climate, do you think there are other people in public life who can play a similar role to that of McCain?

A: No. That’s simplistic, but I’m afraid very true. Most of the senators are too timid to strike out on their own and forge a path outside party or president.

Those who are cast in the McCain mold – Jeff Flake of Arizona, Bob Corker of Tennessee – are leaving. Ted Kennedy is gone. Susan Collins of Maine is sometimes independent, but she really has to pick her spots.

A: I’m thinking about my next book, but I can’t say what it is yet! I’m also a full-time staffer for Stateline.org, a news service. We write about state issues, which, given today’s atmosphere in Washington, is a pretty good beat!

A: It has been a true pleasure to write about John McCain’s life, not once but twice. Reader’s Digest used to have a feature called “The Most Interesting Character,” or something like that. McCain certainly fits that description.

When you write a biography, the subject pretty much moves into your house and you live with them for a time. It helps if they are interesting!

I wrote an earlier biography of him for a series of books aimed at schools and libraries. This time, the pictures tell the story, woven with, I hope, a few well-chosen words. I understand he’s had a chance to look it over, and I can almost hear him wise-cracking at some of the shots. That makes me happy.