Michele Zackheim's most recent book is the novel Last Train to Paris. She has written two other novels, Violette's Embrace and Broken Colors, and a work of nonfiction, Einstein's Daughter. She also is a visual artist, and she teaches creative writing from a visual perspective at the School of Visual Arts in New York City. She lives in New York.

Q: Last Train to Paris was partly inspired by a true story. How did you combine the fictional and historical elements?

A: I was flabbergasted to discover, in an essay by Janet Flanner, that a distant cousin of mine had been murdered in Paris in 1937. Not only had she been killed, but her murderer was the notorious Eugen Weidmann, a German citizen called “the handsome devil” by the press.

The story created an uproar in the Western world. Blazing headlines, suggesting all kinds of sexual and spy-driven mischief, were fed to the reading public for weeks. The editors must have thought this story would get people’s minds off the impending war.

At first I planned to write a nonfiction book—a kind of family memoir; my first book, Violette’s Embrace, had begun with a true story as well. But the factual material of the trial didn’t hold my interest long enough, so I decided to create a fictional character, an American journalist, who would tell the story: Jimmy Corso, a tough but sensitive guy. 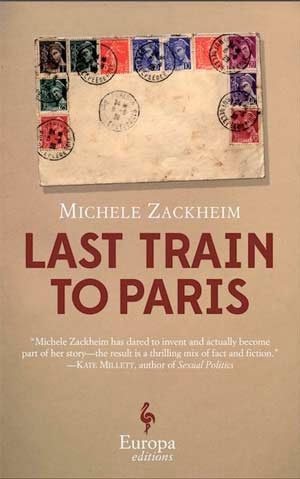 After three years of work, I turned the book in to Europa Editions. Two weeks later, I asked for it back; I knew it wasn’t quite right yet. Fortunately, my dear editor and publisher, Kent Carroll, agreed.

I decided to turn Jimmy into a new character—a woman—and found that her voice worked better for the story. I named her Rose Belle Manon and modeled her on the woman I might have been in 1937.

Now I was free to write about that dark prewar time, later called “the silent war,” and follow the trial while exploring the life of a courageous yet frightened young newspaperwoman. Then I expanded the frame: Rose, at the age of eighty-five, would look back and describe the journeys of her life. 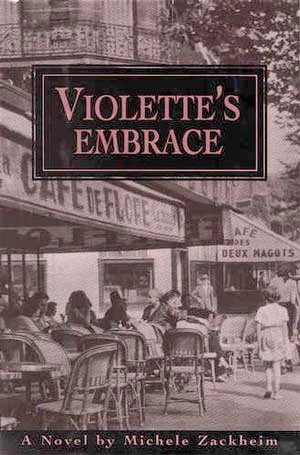 Q: What type of research did you need to do for this novel?

A: Most of my information came from the Paris edition of the New York Herald Tribune, which I used as a model for the newspaper Rose works for in Paris; the writings of Colette; the essays of Janet Flanner from The New Yorker; the works of Jean Genet and André Gide; and the transcripts of the scandalous and popular trial of my cousin’s murderer.

As with all my books, I need to see and smell the places I write about. I went to Paris and Berlin, walking the streets and taking notes.

For instance, how would Rose feel as she was racing down the platform at the Anhalter Bahnhof train station in Berlin, lined with German soldiers . . . having to make a heartbreaking choice of whom to take with her on the last train to Paris? Every specific detail, I found, made the story come alive.

Oh, and I always buy postcards, lots of old postcards. I need the sensation of the “color” of the time in front of me while I write. 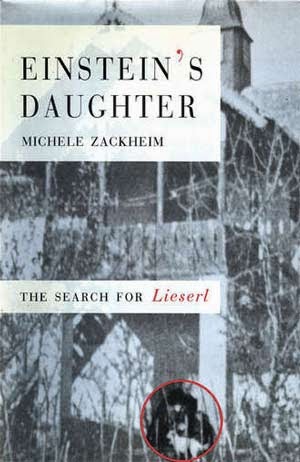 Q: As someone who's written both fiction and nonfiction, do you have a preference?

A: The hardest book I’ve written was Einstein’s Daughter: The Search for Lieserl. It is seriously nonfiction. I use the word seriously because it is hard for me, I admit, to stick to what is considered the “truth.”

I would rather write dialogue that I’ve created to make the scene more dramatic . . . to embellish the story with fictional moments . . . to make the emotions more intricate and subtle.

I’ve always appreciated the Einstein book’s editors at Riverhead for being so kind as they winnowed my imaginative additions from the facts. This is a long way of saying that I’ve discovered that I prefer to write fiction.

Q: How does your work as an artist affect your writing?

A: I “see” faint fragments of the story first. As if I were working on a stretched canvas, I lightly pencil in the image. Then I begin to add the color, and then the texture, and then I move the paint around to create luminosity or shadows or mundane effects. 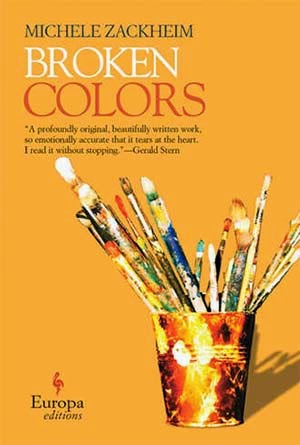 One of the sensual tasks I could never achieve as a visual artist was the illustration of an aroma. It delights me to try to do this with language.

A: I’m working on a new novel about three women who know each other’s creative work, but don’t meet until later in their lives.

A: My first reporting job was for the Compton Herald American in 1957. I covered high school and junior college football games. My editor often corrected my drafts. “It’s not a wrinkled blue jersey with a light magenta number 72,” he would say. “It’s Marvin Fleming, number 72.” Even then I was embellishing.

When I was 19, I returned to Virginia City, Nevada, where I had been born. This was the first time I had been back since I was 3. As I was walking along the wooden sidewalk, I heard a woman’s voice: “Lucius, Sam Zackheim’s back.” Straight ahead of me was a man with a giant beige cowboy hat and pointed-toed red cowboy boots. “Ida,” he said, “it’s not Sam. Must be his daughter.”

I was totally confused and must have shown it. The man laughed, put out his hand, and said “Howdy, Miss Zackheim. Name’s Lucius Beebe. Do you know who I am?” I shook my head. “Well, young lady, I own the Territorial Enterprise.” “Wow,” I said. “Mark Twain’s newspaper?” “Well, not his newspaper. He just worked there. Does your dad still have Twain’s desk?” “I think so,” I said.

Ida, whose voice had announced me, was Virginia City’s sole telephone operator. She was blind and had learned over many years how to identify people’s footsteps and voices. My walk was clearly like my father’s.

That evening Mr. Beebe—“Call me Lucius,” he insisted—took me out to dinner at Piper’s, the old opera house. He told me the story of the desk. After Twain left the Territorial Enterprise, the desk had been used by the Fourth Ward School; it was a tradition for students to write their names on its underside when they graduated.

“When your father resigned from teaching here to go to a better job in California, the school gave him the desk as a gift. Your parents lashed it to the roof of their car. The next time you see the desk,” he said, “be sure to look for Twain’s own signature on the bottom.”

Fifty years later, when I inherited the desk, I looked. I even used a magnifying glass. There were many signatures, but no Samuel Clemens. No Mark Twain.

Still, I’ve always felt a link with him—and one of his sayings seemed so perfect for me that I made it the epigraph of Last Train to Paris: “Get your facts first and then you can distort ’em as much as you like.”