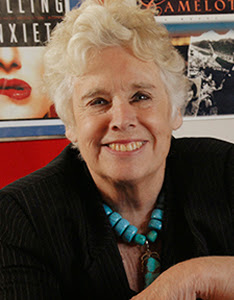 Caryl Rivers is the co-author, with Rosalind C. Barnett, of the new book The New Soft War on Women: How the Myth of Female Ascendance Is Hurting Women, Men--and Our Economy. Rivers' many other books include Same Difference and The Truth About Girls and Boys, both co-written with Barnett, and the novel Virgins. Rivers is a journalism professor at Boston University's College of Communication. She contributes regularly to the Huffington Post.

Q: Your book disputes much of the recent commentary about large gains for women in the workplace. Why do you think two such different pictures have emerged?

A: Several reasons. One is that people—including journalists—look at statistics and misread them. For example, all the stories about women being “The Richer Sex” did not tell the real story.

In 2009, Bureau of Labor Statistics released data saying that 40 percent of women outearn their spouses. But in fact, the only segment of society in which a substantial percent of wives significantly outearn their husbands is low-income workers, couples whose earnings average some $20,000 a year. This is rich?

The richer the couple, the less likely it is that a woman will outearn her husband. (Among affluent couples, it’s about ten percent). But the facts did not dampen the enthusiasm for The Richer Sex stories.

As for the “end of men,” it is based on statistics that women earn the majority of advanced degrees. But while women are doing spectacularly well in universities, in the workplace it's an opposite picture.

Women are stalling out, and the higher they go, the harder it gets. Women are not making the progress they have a right to expect, given their education and early promise. The Sloan Foundation says it is doubtful that women will be leaders in the areas they have studied in.

Gender discrimination has not gone away, it has just gone underground, and derails women as they try to move up. 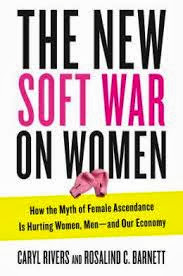 Q: Your title refers to a "soft war" against women. How would you define a soft war, and how does it compare to earlier forms of discrimination?

A: Why do we call it soft? Because research finds that today’s barriers are more subtle and insidious than the old ones. It’s less a frontal assault than an ongoing and very effective guerrilla movement. Now, bias operates under a welcoming facade; the bombs are under the surface, but they still explode.

This isn’t an overt conspiracy to hold women back. Instead, it’s a perfect storm of economic, political and social factors that combine to threaten women’s progress.

Today, nobody says, “No women need apply.” But people may say, “You’re just not as likable as he is.” And even if he is not as good as you, he will be promoted because he is seen as more likable. The more competent a woman is, the more she is seen as bitchy, unfriendly, and not a good colleague.

Or, you will hear, “You women have come far enough. Now we need to pay attention to the men.” Or, “You’ve done great work, but I’ve got more confidence in Joe’s potential. He’s going to be a star!” Research finds that women are promoted on performance, while men are often promoted on promise.

If you’re a female in a top job and you slip up in a man’s world, you’re most likely out the door. If you’re working on a project with a man, he’ll probably get the credit you deserve. (We heard this complaint again and again from women around the U.S.)

You and your male colleague may both have a mentor, but he’ll get a sponsor—an advocate who will go to bat for him in a way that a woman’s champion will not.

If you are a mother who is serious about your work, you will be looked on as not really committed to that work, and not very competent to boot. A man with a résumé just like yours, however, will get a bonus for parenthood; he will be seen as serious, dedicated and responsible.

If you speak up at some length at work, even if you are in a senior position, you will be seen not only as gabby but also as incompetent. A man who talks as much or more than you do will be seen as powerful and forceful. 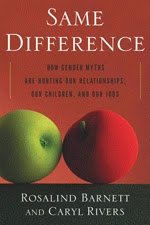 These attitudes—held by both women and men—put a brake on women’s advancement.

Q: Why do you think gains for women in the workplace have stalled, and what do you think could be done to change that pattern?

A: Picture two people, a man and a woman, starting out on a lifelong path of work. Both are equally qualified, both have the same sort of dreams, and both are willing to work as hard they can to achieve their goals.

But only one of these people, the man, is unencumbered. The other carries a fifty-pound pack on her back. He strides freely and swiftly. She travels much more slowly, struggling with a burden that she can’t seem to shed.

Gender discrimination is as heavy as a pack filled with large rocks that slows her down as she struggles to move ahead. She has to muster a great deal of energy and resources to continue her journey.

In spite of the extra burdens they carry, women are making progress in reaching their goals. But it’s slow going, and the number of women thins out as the top of the ladder comes into view. Gender discrimination is a drag anchor for too many women.

Q: You write, "It is both the best of times and the worst of times for women in science, technology, engineering and math (STEM)." Why is that, and what do you see looking ahead?

A: A 2011 U. S. Department of Commerce report said that women are vastly underrepresented in STEM jobs and among STEM degree holders. Although women fill close to half of all jobs in the U. S. economy, they hold less than 25 percent of STEM jobs.

The problems women have with STEM start very early in life—in elementary school, in fact. 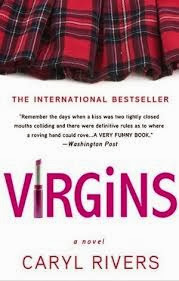 The issue isn’t lack of aptitude, according to a huge study by Jonathan M. Kane and Janet E. Mertz of the University of Wisconsin They analyzed scores from more than half a million fourth-and eighth- graders from more than sixty countries.

Their conclusion: There were essentially no gender difference between girls and boys in math. That’s the good news.

But when women do opt for STEM, there are obstacles. Women in the high-tech world too often don’t get second chances. In such a risky business, there are plenty of failures.

When women they fail, they sink, report the Athena Factor project, sponsored by IBM, Microsoft, Dell, Cisco and others. Women in high positions in male-dominated fields suffer harsher penalties than men when they slip up. Men usually get a second chance, even when they reach high but miss the brass ring. It’s much harder for women to take the kind of risks that catch the eye of higher-ups.

If a man fails, his buddies dust him off and say, ‘It’s not your fault; try again next time. Women find it extremely difficult to take these kinds of risks-- their buddy system just isn’t strong enough to save them if they fail.

Too often a woman fails and is never seen again.

So we need to encourage girls when they’re in pigtails and keep on boosting them when they are trying to move ahead in STEM fields.

A: Statistics tell us that a baby girl born today has a very good chance of living for a century. So we are working on “Are you ready for the hundred-year life?”

A: Yes—that women too often suffer from a “rose-colored glasses” syndrome. They think discrimination is ancient history. If women buy the message that all the gender battles are over, but they still aren’t advancing as fast as they should be, they may believe there’s no one to blame but themselves.

What to do? Take more courses, beef up your credentials with more degrees, work harder, join company sponsored self- esteem-building programs and on and on.

But if the problem is subtle discrimination, along with deeply entrenched gender stereotypes, self- improvement will have only a limited payoff for moving ahead. If you put all your eggs into the self-improvement basket and forgo any concerted action with other women (or sympathetic men), your stall will be permanent. Too often, we have met the enemy, and she is us.