Meriel Schindler is the author of the new book The Lost Café Schindler: One Family, Two Wars, and the Search for Truth. It focuses on her family, the Holocaust, and a café the family owned in Innsbruck, Austria. Schindler is also an employment lawyer, and she lives in London.

Q: How would you describe your relationship with your father, and how much did you know about his family history as you were growing up?

A: I had a difficult relationship with my father, Kurt.

He was tall handsome and a brilliant raconteur—but did not always tell the truth and had a tendency to fall out with people. We grew up with many anecdotes and I was never sure whether what he told us was true.

Kurt liked to claim kinship with the rich and famous. According to him we were variously related to Franz Kafka, Oskar Schindler, Alma Mahler (wife of Gustav Mahler), Adele Bloch Bauer (the subject of the Klimt painting “The Woman in Gold”), Bruno Kreisky (post war president of Austria) and to the Jewish doctor who treated Hitler as a young man as well as Hitler's mother Klara. The latter seemed too far-fetched but turned out to be true.

As to family history, I knew that we had had a café in Innsbruck and that when the Nazis arrived in Innsbruck, they forced my grandfather to sell it. I did not know much else and did not know what had happened to my family.

I have been told that the book reads like a real-life detective story. The book was a quest to untangle the truth, sort fact from fiction, and reunite a family scattered by the Second World War and my father's feuding.

Q: What role did the Café Schindler play in your family's history?

A: My grandfather Hugo fought in the First World War on the Southern Front for the Austrian Hungarian Empire. The Southern Front was a murderous 600km front that snaked through the Alps and then down to Trieste in modern day Italy.

The brutality of this war was famously depicted in Hemingway's love story A Farewell to Arms, in which he describes his time working as an ambulance driver.

Miraculously, my grandfather survived the fighting and returned to Innsbruck, a city that was destitute and starving. His reaction was quite extraordinary: he opened a café in 1922 in the middle of Innsbruck, which became an oasis of luxury and fun. 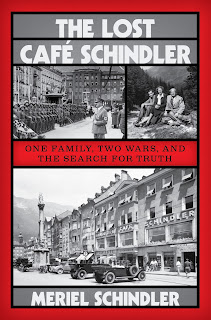 The Café Schindler was in a beautiful triple-fronted building on the main street in Innsbruck. After the horror of fighting in the First World War, Hugo wanted to offer his hometown a sanctuary from the economic woes of post First World War Austria.

The café, with its live music, dancing, fabulous cakes, and liqueurs brewed in the family distillery, became the much-loved social hub of Innsbruck and was an eyewitness to all the history that followed. After the Anschluss in 1938, Hugo awoke one morning to find the café covered in Nazi graffiti.

The Nazis forced my grandfather to sell the café and he fled to London. The café then became a Nazi officers’ drinking club.

After the war my grandfather was one of the very few Jews to return to Austria. He got his beloved café back and rebuilt it after it was damaged by allied bombing.

Sadly, he died in 1952 and my father inherited the café only to fall out with family members and sell it. My father spent his entire life regretting the loss of the café and striving through litigation to restore his family to the glory years of the 1920s and 1930s.

The café lived on in people's memories. Then extraordinarily, 10 years ago a young restauranteur opened a café using the same name in the same building.

The café now stands for the resilience of Jewish enterprise and the importance of good coffee and café!

A: I have come to realise that although my father died destitute, what I have inherited is an incredibly rich and interesting history and I am incredibly grateful for this.

A: My father was a hoarder and never threw anything away. After he died, we arrived at his cottage to find papers on every surface. Some were mundane; others shocking and extraordinary. We discovered that he had hired private detectives to investigate and report on us, his daughters. And there were also piles of Nazi-era documents he had saved in order to pursue a lifetime of restitution claims.

So, I had lots of papers and also some extraordinary photo albums from my father. I also visited archives and museums.

Above all, I visited the places where events happened. This included walking up the mountains in which my grandfather fought in present-day Slovenia and going pole-dancing in my great-grandparents’ old flat!

A: There are still so many untold tales from this era. So I have a few ideas which I am exploring.

A: My father's faulty memory extended to the events of Kristallnacht in November 1938. This was a pogrom orchestrated primarily to drive the Jews out of the German Reich. My grandfather Hugo was beaten up and left for dead by people he knew.

Kurt, my father, claimed that as a 13-year-old boy he witnessed the attack on his father and used the trauma of that incident to explain away much of his later behavior.

Kurt related the events of that night of terror in vivid detail to us as children and sought the help of psychiatrists to deal with its effects on him. Those psychiatric reports were then used by him to defend litigation brought against him.

In my research I uncovered incontrovertible evidence that Kurt was not actually present during that night. I was forced to ask whether Kurt had deliberately lied or whether his false memory was a product of the dislocation of war and his refugee experience.