Jenny Holiday is the author of the new novel Duke, Actually. It's the second in a series, following A Princess for Christmas. Holiday lives in London, Ontario.

Q: What inspired you to write Duke, Actually, and how did you create your characters Dani and Max?

A: This series, and in particular the first book in it (A Princess for Christmas), was inspired by my dad’s love of Hallmark Christmas movies. He is super into them, but is always surprised by every plot twist and worried about how it’s all going to work out.

I was visiting him once over the holidays and he was amazed how I could always figure out what was going to happen. That got me thinking, hmmm, could I write a book like this, except maybe a tad snarkier and steamier than the Hallmark version? So that’s where the project came from.

Max and Dani are the best friends of the characters in book 1, and when it becomes royal wedding time, they are slated to be the attendants.

Q: What are the connections between Duke, Actually and the film Love, Actually?

A: Max is actually a baron, but he has a reputation for being a bit of a playboy and the tabloids have nicknamed him the Depraved Duke. So he’s always having to correct people and say, “Baron, actually.”

And I don’t want to give too much away, but it’s possible that life starts to imitate art a little. (All this said, you definitely don’t have to be a fan of Love, Actually or even to have seen it to enjoy the book.) 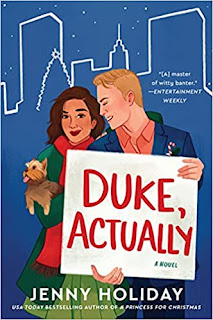 A: I think about romance novels as having two “lanes.” There’s what happens—the plot. But then there’s the emotional arc—usually centred around some sort of conflict, aka a reason the characters can’t just get together at the start of the book.

With this book, and with most of my books, I have a broad sense of how the emotional arc is going to play out. I know how and why they are getting in their own way and how that conflict is going to be resolved.

But I don’t necessarily have the whole book in my head and I do make changes along the way, even though that “lane” is pretty firmly established in my mind.

A: As cheesy as it sounds, I hope they take away the same message from all my books, and it’s the message I as a reader take away from my favorite romance novels: that everyone is worthy of love, that letting yourself be loved can be scary but it’s worth it.

(In this book, obviously, it’s romantic love, but it’s not only romantic love. For example, Max and his brother repair their relationship through the course of this book.)

A: I just turned in book 3, which is the final book in this royal Christmas universe.

It’s about Mr. Benz, very proper and uptight equerry to the throne (he appears a bit in this book but is a more central character in A Princess for Christmas) and the American management consultant who is hired to come in and overhaul a company owned by the royal family.

After that, I have a standalone novel called Canadian Boyfriend coming out in 2023.

It’s about an American woman has a chance teenage encounter with a visiting Canadian hockey player. She then uses the idea of him to create a fictional Canadian boyfriend to get her out of sticky social situations. Years later, she meets him again as an adult, and things get complicated!

A: I’m listening to Christmas music as I type the answers to these questions! (My fave Christmas album of all time is Annie Lennox’s A Christmas Cornucopia.)