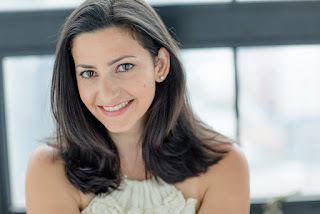 Emily Barth Isler is the author of the new middle grade novel AfterMath. She is a sustainability/beauty journalist and former child actress, and she lives in Los Angeles.

Q: In your Author's Note, you write that the idea for your novel came from the San Bernardino mass shooting in 2015. Can you say more about that, and about how you created your character Lucy?

A: I used to balk at this idea when other writers said things like this, but I have to admit that Lucy “arrived” fully formed in my head. AfterMath is the third complete novel I wrote (the first one that I sold), but the writing process was so different from the first two manuscripts I wrote. Much of it came to me in one piece, as if in a dream.

I was watching and reading the news immediately following the San Bernardino shooting and was so struck by the narratives about the “lucky survivors.”

Of course, I’m happy for every single life that is spared, but the way the media was talking about the people who were present for this shooting and made it out alive was really interesting.

Somewhere, someone said how fortunate it was that these people could “go on with their lives as if nothing happened,” and I was just shocked. No one can-- or should have to-- walk away from such a traumatic event and just “go back to normal” right away, and yet many people expect this of survivors.

I began thinking about all of the ways that our society doesn’t support survivors--war veterans, cancer survivors, people who go through all kinds of abuse, etc. Our culture likes a tidy narrative, a “happily ever after,” which is sometimes pretty unrealistic.

Instead, as many of us know, the path following a hard illness or long deployment or battle of any kind--or even a joyous yet stressful event like becoming a parent or moving to a new place--is full of ups and downs, moments of triumph, and times of deep sorrow. It’s a lonely thing to go through.

Though I’m not a survivor of a school shooting myself, I am the survivor of a different traumatic event, and know firsthand how unique every healing journey is, and how lonely, even when you have great support.

It wasn’t a far leap to imagine putting myself in the shoes of those who survived the San Bernardino shooting, or any of the school shootings that I had watched unfold via the news in horror--Sandy Hook, Columbine, Virginia Tech.

Yet I knew that I was not the person to write a first-person narrative about surviving a shooting. I created Lucy to be an outsider to this experience, just as I and the majority of AfterMath readers are.

Like the Rudine Sims Bishop quote about books being windows and/or mirrors for readers, I wanted Lucy to be a stand-in for all of us who continue to experience trauma and grief from hearing about mass shootings in America, but haven’t experienced them firsthand.

I also knew that Lucy had to have a grief of her own, that she could relate to her new classmates in some way that both distanced and united them. I came up with the idea for her brother, Theo, in honor of a little boy I knew of, the godson of a dear friend of mine, who had recently died of a heart condition.

A: Like a lot of things related to AfterMath, the research for this book found ME at first. It was unavoidable. I’m an avid newspaper reader, and there were so many stories about school shootings, of course, but then there were also other stories that were more about what happened after the tragedy.

I started collecting articles--mainly from the Washington Post, Baltimore Sun, and New York Times--and a lot of that coverage became the foundation for the book.

Twitter was also a great resource (that’s a sentence that I don’t type a lot!) for the book. After writing the first draft, I started following several gun violence prevention advocacy groups, survivors, parents of kids lost in school shootings, and journalists who were covering the topic.

Organizations like TheTrace.org, Moms Demand, and Sandy Hook Promise were amazing resources for learning more about what life was like for the survivors and families of the victims of mass shootings.

I learned so much from reading the tweets, blogs, and essays of survivors, families, and advocates. A few women I have especially enjoyed following and learning from are Lucy McBath, Nelba Márquez-Greene, and Shannon Watts.

Q: The Publishers Weekly review of the book says, “Showing a keen understanding of loss, Isler’s compassionate debut is written with stark honesty, showcasing various responses to tragedy, including Lucy’s parents’ inability to talk about the past, the students’ collective need to share their stories, and encouragement of therapy.” What do you think of that description? 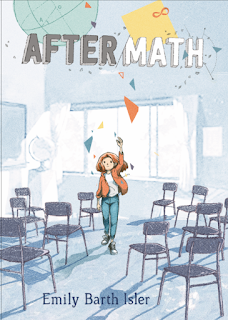 A: I’m really proud of that review and think the description is pretty much everything I could have hoped for when I wrote the book!

I wanted to showcase a less-common but more personal response to grief and trauma, which is Lucy’s classmates’ response--the almost compulsive need to get their stories and identities out when they first meet her.

These are kids who experienced a horrific trauma at a young age, and then have all lived together in the years since. Lucy is the first new kid at their school, and they all feel the need to make sure she knows what they’ve been through. In contrast, Lucy has made the decision not to tell them that she’s recently lost her brother.

The stark difference between their openness and her secrecy fascinated me, and also lent itself so well to the theme of math in the book and the way Lucy sees the world via equations and formulas.

The other reason I wanted Lucy’s classmates to be so open about their trauma was that it closely mimics my own experience.

I survived a violent attack at school in my senior year of high school, and many of my peers who witnessed it didn’t ever speak of it to me. In fact, many of them never spoke to me again, period. It was as if they didn’t know what to say, and thus decided to remain silent in my presence.

I blocked out the incident for a while, but, like all traumatic things, it came bubbling back up to the surface eventually, and, much like Lucy’s classmates, I found myself telling anyone I met about the traumatic attack I had endured. It was part of my healing process to talk about it.

I like to think there is a healthy medium in this regard--something between shoving feelings down and hiding them, and telling every stranger on the street about your trauma.

I think this current generation of kids is much better off than my generation was at their age. Thanks to social media, the #MeToo movement, and the examples of many high-profile people, it’s getting more normalized to talk about therapy and trauma and recovery.

In some ways, Lucy’s new classmates present an ideal version of recovery--they talk openly about going to therapy, they name their feelings and recognize their journeys, and those who suffer from PTSD or other long-term conditions aren’t embarrassed to talk about it.

A: Both! I started out with two scenes that came into my head very clearly, both of which have remained in the book almost exactly as I originally wrote them six years ago.

One was the fire at school, and the other was one of the opening scenes of Lucy in her new bedroom that once belonged to Bette, who was killed in the school shooting.

I knew that the book would center around holding hands, and the different ways people can hold hands and the different things it can mean to them, so I did start out hoping that Lucy would get to hold hands with Joshua in the final scene, in a way that meant the same thing to both of them.

I then wrote an outline of the story, and this is actually one of my favorite things about this writing process: I made a typo in the outline that ended up shaping the major arc of the book!

I meant to write: “Lucy tells Mr. Jackson and Joshua about Theo, her brother who died.” But instead of writing Lucy’s name, I wrote Avery’s name there.

And when I was working on the book and got to that part, I saw my mistake and then thought, wait a minute, that’s a far more interesting way for this secret to come out! Instead of Lucy disclosing her story, what if Avery tells her secret! What if it causes a big problem in their friendship? And that ended up being my favorite part of the story!

So I did outline, but I always like to leave myself open to surprises, changes, and lucky typos!

A: I am working on another middle grade novel, this one about mothers and daughters.

I’m in the middle of that life-sandwich now--I have a daughter and I am a daughter--and while none of the three characters in this upcoming book are at all like my daughter, my mother, or me, it’s fascinating to think about these relationships from a different perspective.

There’s also some time travel/magical realism in the book, so that’s new and fun and different for me!

I also write regularly as a journalist about sustainability, specifically sustainable makeup, skincare, body care, and accessories. I love combining my interest in skincare with my passion for environmental activism.

I’m particularly focused on ethical sourcing of ingredients, which can mean that they are procured in a way that is environmentally responsible and/or that the people who grow and harvest the crops are treated and compensated fairly (and, ideally, both!).

So many indie companies are doing great work in this area, and it's fun to shine a light on them.

A: I’m donating some of my proceeds from AfterMath to a few different gun violence prevention organizations I admire, and hope that readers will feel inspired to get involved somehow with the movement to end gun violence and create common sense gun laws.