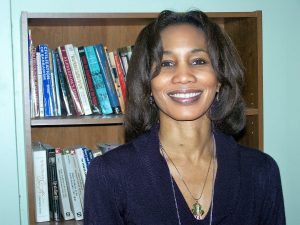 Karen Cook Bell is the author of the new book Running from Bondage: Enslaved Women and Their Remarkable Fight for Freedom in Revolutionary America. She also has written the book Claiming Freedom. She is Associate Professor of History at Bowie State University.

Q: What inspired you to write Running from Bondage?

A: Researching my first book introduced me to women who fled slavery either alone or with their families during the late 18th century. This led me to question how widespread was the flight of enslaved women.

My research led me to the American Revolution which according to historian Benjamin Quarles was the first large-scale slave rebellion. I wanted to tell the stories of these women who fled or attempted to flee bondage during the Revolutionary Era.

My book consists of five chapters that examine why and how enslaved women escaped bondage and the challenging circumstances they faced over the course of five decades from 1770 to the 1810s.

I unpack enslaved women’s labor during the colonial period and their various resistance strategies and then take a deep dive into looking at the lives of individual women who escaped.

The book really underscores the fact that enslaved women were not one-dimensional figures but lived multi-dimensional lives as wives, mothers, sisters, and freedom fighters.

A: I began this study five years ago and the research for the study brought me to the realization that there is so much that historians can uncover in the lives of enslaved women.

Although the evidence is fragmented, the experiences of fugitive women are far from unknowable. I used runaway slave advertisements, trial records of fugitive slaves, and an interview with George Washington’s escaped slave Ona Judge.

There is a great amount of literature on enslaved people who escaped during the 1800s; however, the accounts of runaways during the 1700s are limited to colonial newspaper advertisements for runaways. 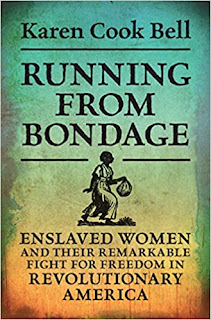 Each advertisement describes the story of a real person, not an abstraction. When further research is undertaken in other sources, real human beings begin to emerge from the records.

We do not know the ultimate fate of the majority of the individuals named in the advertisements. But given these limitations, the runaway advertisements offer a remarkable amount of information about women caught in a horriﬁc system of bondage.

The story of Margaret Grant will surprise people. Margaret escaped slavery twice, first in 1770 then in 1773 both times from Baltimore, Maryland; and in her first escape she wore men’s clothing and sought to conceal her identity by dressing as a waiting boy to an escaped English convict servant, John Chambers.

So Margaret sought to escape by passing as both white and male performing fugitivity in a way that Ellen Craft, another escaped slave, would do decades later.

Also surprising is the fact that women not only ran away with immediate family members, but also in groups without established kinship relations.

They correctly perceived that their best chances for freedom resided with a British victory and a disruption of the existing social order. In the north and south, women ﬂed to urban centers, took refuge in British camps, aided the Loyalist cause as spies, cooks, nurses, and performed duties for the British Army Ordnance Corps.

In the postwar period, most Black women did not seek freedom in the North, but instead pursued “informal freedoms” in urban cities such as Baltimore, Richmond, Charleston, Savannah, and New Orleans where they deﬁned freedom in terms of family and mobility.

In these cities, they relied on networks of acquaintances, marketable skills, clothing, and language skills to assume identities as free women and carve out free spaces for themselves.

Q: Can you say more about the impact the Revolutionary War had on enslaved women?

A: The war bolstered the independence of fugitive Black women, gave them increased access to their families with whom they ﬂed, and greater autonomy in their day-to-day lives once they reached safe havens.

Women ran away during the Revolutionary and post-Revolutionary period to claim their liberty, an act which they viewed as consistent with the ideals enunciated in the Declaration of Independence. Underlying the causes of their ﬂight were efforts to defend their bodies and womanhood against exploitation, as well as to protect their children from the deleterious effects of the institution of slavery.

To understand women’s lives in, and resistance to, slavery requires examining their efforts to escape bondage, and symbolically how what they wore and carried with them in the process of fleeing were political acts that challenged enslavers’ powers.

Political acts of resistance, such as flight, and women’s thoughts about resistance are in constant dialogue. Although the flight of enslaved women was one of institutional invisibility in that there was no formal organization, no leaders, no manifestoes, and no name, their escape constituted a revolutionary social movement in which fugitive women made their political presence felt.

In fact, fugitive women displayed a radical consciousness that challenged the prevailing belief that enslaved women could not gain their freedom through subversive actions.

A: Instead of viewing Black women as at the margins of the American Revolution and abolitionism, it is important to see them as visible participants and self-determined figures who put their lives on the line for freedom. They protested with their feet by running away, which underscores the vital role of Black women in seeking to move the nation toward a more perfect union.

This story represents an important part of Black women’s political history and adds to the discourse of how African American women organized in their communities, protested slavery and segregation, built institutions, and fought for equal access to the ballot.

Black women have been in the forefront of movements to address iniquity, social oppression, and freedom for the Black community for centuries. This is a fight that began during the Revolutionary Era.

A: I am editing a book on African American women during the Civil War and Reconstruction Era which is being published by Cambridge University Press.

The book explores the ways in which Black women, from diverse regions of the American South, employed various forms of resistance and survival strategies to navigate another tumultuous time in American history.

It is a collection of case studies of Black women’s lived experiences in the Confederate South and border regions of the U.S., which highlights the complexity of Black women’s wartime and postwar experiences, and provides important insight into the contested spaces they occupied.

The central arguments presented in this collection are twofold.

First, time and place shaped freedom and the lived experience of Southern Black women. During the Civil War, Black women experienced emancipation differently from men as they struggled against sexual violence, re-enslavement, and the tensions inherent in the contests over the realization of freedom.

Second, freedom’s boundaries after the war were often contested and fluid as Black women’s lived experience was characterized by ambiguity, the persistence of “unfreedoms,” such as convict leasing, persisting racial violence, peonage, and unequal citizenship.

The essays in this collection, working from varied perspectives, help us to understand the complexity of Black women’s struggle.

A: I wanted this book to be readable, so one of my strategies was to foreground each chapter with the escape of an enslaved woman.

I wanted to give as much flavor as I could to the text so I sprinkled the text with the other facets of their experiences such as how they dressed and what they wore while fleeing; what they took with them, the obstacles they faced, and where they might have gone. I wanted to show the reader the tenacity, skill, and intelligence of these women.

I also directly engage the archival silences in runaway advertisements to imagine the varied meanings and possibilities that are inherent in these silences.

The goal of this study is to present an American Revolution that reflects the totality of the lived experiences of Black women. One that emphasizes the chances taken by Black “founding mothers” such as Margaret Grant and their important contributions to the cause of liberty. Wherever freedom is cherished, their struggles and sacrifice should be remembered.