Jessica Koosed Etting and Alyssa Embree Schwartz are the authors of the new young adult novel Fade into the Bright. Longtime writing partners, they have collaborated on a variety of books and screenplays.

Q: You write that the inspiration for your new book came from knowing people who had the gene for Huntington's disease. How did that lead you to create this novel and your character Abby?

A: When Jessica’s cousin’s wife, Kate, discovered that her mother had the gene for Huntington’s disease, we had never heard of this disease before, and the immediate Google search was shattering. Fatal genetic brain disorder. Hereditary. No treatment. No cure. Like Alzheimer’s, Parkinson’s and ALS combined. Typical onset: between 30s and 40s.

Following the diagnosis, the two of us went back and forth on Facetime for hours, concerned for Kate’s family and trying to find ways to help them cope.

As we searched for answers to impossible questions, the story of Fade into the Bright began to unfold. We had learned that those at risk for HD cannot legally test until they are 18 years old, which felt like a starting point to us.

Immediately, we were thrust into the story of Abby, an 18-year-old girl not just making that choice to test – but then having to live with the results of that choice forever. A girl whose gut instinct is to escape to an island, and the summer of reckoning that follows as she grapples with whether this knowledge changes everything – or nothing.

A: We did more research for this book than anything else we’ve written. We immersed ourselves in every scientific article and book about HD that we could find, while also reading blogs, forums and every personal account out there written by people with HD or their caregivers.

Our goal was to understand the medical aspects of HD as well as the rollercoaster of emotions that families have experienced before and after diagnosis.

We chose to set our novel on Catalina Island off the coast of Los Angeles and neither of us had visited since we were in our teens. Because the location is a huge part of the book, we took a three-day research trip there and it was more inspiring than we ever could have anticipated.

When we arrived, we found out that there is basically no Wi-Fi on the tiny island, but after the shock wore off (and Jessica figured out a way she could still watch The Bachelor finale), we realized it was a blessing in disguise.

Exploring the magic of Two Harbors without the usual distractions was incredible. Not only did we meet so many great people who inspired several of our characters, but we also found the most peaceful, ocean-view spot to write from every day.

Since we live on opposite coasts, the fact that we were actually sitting across from each other and not staring into the void of Facetime also made the research trip amazing.

Q: How did the two of you collaborate on the book? Can you describe your writing process? 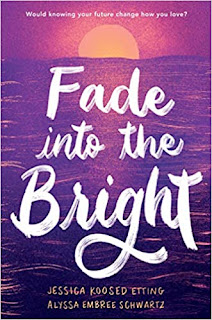 A: We’ve been writing as a team for 18 years in TV, film, and books, so we have a well-honed system we use every time.

We do all the initial brainstorming of the story and characters “together” on FaceTime (Jessica lives in L.A. and Alyssa in D.C.). We do a very extensive outline in a shared Google doc that would probably make no sense to anyone but us. We’ve been best friends for over 20 years so at this point, we have shorthand for our shorthand!

We always keep the last few chapters of the outline loose because we know how quickly the story or character arcs can shift or mutate into something even better as we write.

Once we’ve outlined the story to death, we split up the first few chapters. We each write a chapter – then we swap and edit, swap and edit, over and over. We go back and forth like this so much that we can’t even tell who wrote what parts by the end of it.

A: We knew the driving emotion we wanted to end on from the start, but we always had a few options of how to achieve it. We didn’t decide until we arrived there in the writing process, which is pretty standard for us.

We got so lost in Abby’s journey ourselves and we wanted to do her story and the stories of the HD community justice. Fortunately, the more we watched Kate and her family navigate the aftermath of their testing, and as we became immersed in other families dealing with HD, we found our way to the ending.

A: We’re always thinking about our next book! Our shared document of ideas is updated weekly and we constantly text each other random flashes of inspiration so we don’t forget them. We also put our Lost Causes sequel on hold to write this book, so we may revisit that. In addition, we are (fingers crossed!) in early chats about turning Fade into a movie so stay tuned!

A: Ironically, the saying that sums up our friendship is “Don’t judge a book by its cover.” We met in our first class on our first day of freshman year of college and it was definitely not a meet cute.

A month into school, we both had to stay late to talk to our professor and ended up walking back to our dorms together. During the short walk, we discovered we had the exact same taste in books—we had grown up on opposite coasts both loving The Babysitters Club and Sweet Valley Twins books—as well as darker, twisty thrillers.

And also, weirdly, we both had the same favorite movie—Robin Hood: Prince of Thieves. To this day, we’ve never met a person who shares that opinion, but we stand by it. Insta-bond! Best friends ever since!