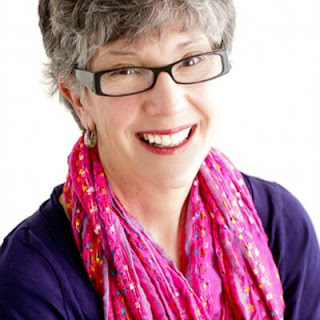 Martha Freeman is the author of Noah McNichol and the Backstage Ghost, a new middle grade novel for kids. Her many other books include Born Curious. She lives in Boulder, Colorado.

Q: How did you come up with the idea for your new book, and for your character Noah?

A: I know exactly where the idea for Noah came from, and that isn’t always true. In fact, it was one of those bolt-of-lightning things that is very rare.

My friend Samantha, who is a high school drama teacher, posted a plea on Facebook for a volunteer to help her with an upcoming production. I had recently framed an old photo of my dad and my uncle working on a college production of Blithe Spirit, and I thought to myself, “Oh, it’s too bad my father is dead. He would have loved to help Samantha.”

Then I thought, “Hmmm, what if a ghost did help out with the school play?” And bingo – I knew I had my next book. After that, it was just working out details.

Noah himself is based on a young man who was a dedicated fan of my early books. His dad is a theatre professor, so it all seemed to fit. 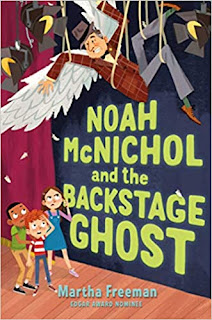 Q: Why did you choose Hamlet as the play the sixth graders are presenting?

A: It’s partly that I happen to know Hamlet pretty well. One of my first jobs was doing publicity for a theatre in California, and they produced Hamlet. Preparing the publicity meant reading the play thoroughly and interviewing the director and the actors. Then, of course, I saw it several times during the run, and I’ve seen it many times since.

The other reason is that I thought of a funny way to rewrite the famous soliloquy – you’ll have to read the book to find out what I did to it.

My No-Trauma Drama idea - rewrites of famous plays to make them more kid-friendly – also seemed especially funny when applied to Hamlet. In the No-Trauma Drama version, for example, Ophelia doesn’t drown. She goes for a midnight swim. So I’d say the tragic play’s potential for humor was also important to my choice.

And a quick note: I don’t approve of No-Trauma Drama - dumbing plays down for kids - which I think is pretty clear from the book.

Q: What do you think this novel says about family secrets and family history?

A: I’m working with aspiring writers at the moment, and one of the assignments I give them is to find the heart in their manuscript. That’s not the same as a message (heaven forbid!) but a nugget that makes a book resonate emotionally with readers. I can’t give an assignment I don’t follow through on myself, so I’ve been thinking more about the heart of my own books.

With Noah, it is the story of Noah’s own family whose details are gradually revealed. Part of being true to our own selves, as Polonius famously advises, is knowing and accepting our own family history.

A: The best answer to that one is the same for all my books. I hope they have a good time and realize that reading can be a cheap, healthy, enlightening lifelong pleasure.

More specifically, I hope they at least become more curious about Shakespeare and theatre generally and maybe, just maybe, they’ll wonder whether Hamlet might be right: There are more things in heaven and earth, Horatio, than are dreamt of in your philosophy.

A: I’m working on my first book set in Colorado, another mystery that I call Dead Man’s Trash. I am told by my editor that that title is unlikely to make it past the marketing department, though.

The inspirations are an estate store I happened to encounter in Arizona many years ago, and the biography of the governor of Colorado, Jared Polis, whose parents – as I understand it – were well-educated Deadheads.

A: You should know that the editor of Noah McNichol and the Backstage Ghost is especially brilliant. Her name is Sylvie Frank. Her books have been nominated for six Edgar Awards (given by the Mystery Writers of America) and have won three.

And I taught her everything she knows – including how to walk and talk - because she is my daughter. We think but cannot prove that we are the only mother-daughter writing-editing team working in the children’s literature game at the moment.