A: It’s hard to say that I formally decided to write it because I’ve always known that the stories of my mother, father, and mine were worth telling.

And as I became a writer and scholar it became clear that there was so much in the collision of those stories that spoke to significant experiences in the world today, particularly with race and immigration.

Plus, my mother always assumed I would write something addressing our lives and so that assumption over time became mine.

Q: The Publishers Weekly review of the book says, "What emerges is a beautiful, plainspoken work in which Chude-Sokei concludes that the cacophonous diaspora he comes from is his actual culture." What do you think of this description? 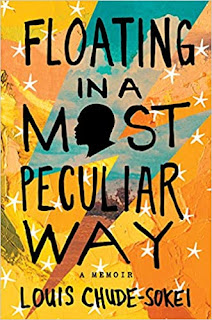 A: I’m pleased to know that the writing stands out because when working on a memoir and faced with an unusual family history, it’s easy for readers to miss the artistry. I’m glad that hasn’t happened, and I’m glad that my directness has struck a chord.

I have no problem with this review’s description of my relationship to a “cacophonous diaspora,” but I’m not sure I’ve established a satisfying conclusion to it yet, even though the book has!

Q: The book's title, and also the chapter titles, come from David Bowie songs, and you write about Bowie in the book. What impact did his music have on you?

A: Absolutely transformative, hence the fact that the quest for his music structures my movement from the refugee camps in Gabon to Jamaica and then to America.

What serious Bowie fans know is that his work led you to so many other things—not just other songs, but books, artists, ideas. This includes stuff off the beaten path. The music gave confidence and style to outsiders and insisted that they needn’t conform and were elegant by virtue of their inability or refusal to fit in.

A: The complex relationships between Black cultural groups and between those groups and White America. And that these groups don’t have uniform interpretations and experiences of racism and therefore respond differently to it.

I hope this will help us start challenging some of the more simplistic and totalizing ideas about racism that are all too common now.

A: Since the memoir is so fresh in the world I’m now catching up to the other “hats” I wear, for example, as a scholar as well as work I do in the world of sound and art. This all should occupy me as I gear up for the next book project, which I’m eager to get to.

A: Just that the best thing about having written this book is that I get to watch it resonate, particularly with people who ostensibly have no relationship to the cultural and social experiences I write about. That’s a remarkable gift.