Laurence Bergreen is the author of the new book In Search of a Kingdom: Francis Drake, Elizabeth I, and the Perilous Birth of the British Empire. His many other books include Over the Edge of the World. He lives in Manhattan.

Q: Why did you decide to focus on Sir Francis Drake in your new book?

A: I’d been thinking of Drake ever since I published Over the Edge of the World, about Ferdinand Magellan’s circumnavigation.

Unlike Magellan, Drake, coming about 60 years later, successfully completed his voyage, which then set up the famous Battle of the Spanish Armada. Unlike Magellan, Drake is a lively, at times sympathetic character, and much better documented. His adventures at sea are indeed thrilling. He is a classic pirate.

The other reason for this book is Elizabeth I, Drake’s sponsor and of course one of most fascinating and, I should add, elusive figures in history. The two of them, it seemed to me, made for an irresistible combination. And they were both redheads. I was sorry when their exploits and the story came to an end.

Q: How would you describe the dynamic between Francis Drake and Queen Elizabeth I?

Backed by Elizabeth, who had become queen by a fluke, and who lived in constant danger of assassination, Drake set out to even the score with a series of daring raids on gold held by Spain in Central and South America.

Drake was not the only ambitious sea captain vying for her attention, but he was far and away the most successful and celebrated. Elizabeth rewarded him accordingly, and this lowly son of a preacher became one of the wealthiest men in England. She also knighted him, which added to his status, and gave him a grand castle to live in. 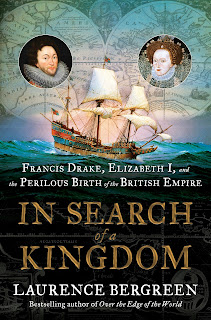 It would be pleasant to report that they were lovers, as well, because Elizabeth could be very flirtatious, her reputation as the Virgin Queen notwithstanding, but it seems unlikely that they were.

Instead, she admired him for the gold he brought back to her impoverished nation, and he obeyed her because she was his sovereign. Drake was always a loyal Englishman even though he had to fight for full recognition at home.

Q: What would you say are some of the most common perceptions and misconceptions about Drake, and what is his legacy today?

A: To my surprise, in an era of barbaric cruelty, Drake could be even-handed in his treatment of indigenous peoples he encountered, unlike Magellan and other sea captains.

Early in his career, the stateless South American Cimarron people admired him so much that they wanted to make him their leader, but Drake, considering himself an Englishman first and foremost, refused the offer, even though it would have conferred status and wealth.

Later, when he visited the Miwok people in the Pacific Northwest, the same thing happened. They were so impressed by Drake and his men that the wanted him to become their leader. Again, Drake refused.

I don’t want to make him out to be a saint. He could be brutal on occasion. He executed at least one crew member whom he suspected of treason, and wealth he brought back to England was simply gold and gems he had stolen from Spain, who had in turn stolen them from various nations in Central and South America.

Although he was extremely devout, the idea of religious freedom, for instance, was alien to him, as it was to most people at the time.

Drake was a man of his era, and he was, make no mistake, a pirate. As an explorer, Drake exhibited remarkably little interest in the world he travelled. Natural phenomena such as oceans, vegetation, weather, and living creatures barely registered in his writings. That was disappointing.

Finally, Drake did not singlehandedly defeat the Spanish in the Battle of the Spanish Armada in 1588. He was part of a group effort, and in the midst of battle he neglected his orders and began gathering plunder for his own benefit. He got away with this lapse because he was Sir Francis Drake by that point.

Over time, he became renowned in popular legend as a prime example of English pluck and courage. There was a lot of truth to that, but it was not the entire story. I will say this, time and again, he exposed himself to danger in battle and at sea, and he seemingly never felt debilitating fear. In this way, he was exceptional.

A: On land and on sea! I retraced his route through the Strait of Magellan in South America, comparing his observations to the terrain as I experienced it. (It was almost identical.)

I did more research in London aboard a replica of Golden Hind, his ship, and at the Tower of London. I combed British archives in the Public Record Office for correspondence and eyewitness accounts. I checked his route with scientists at NASA.

And I scoured libraries in the USA for more documents. Both the John Carter Brown Library at Brown University and Houghton Library at Harvard, where I was on a library visiting committee at the time, proved helpful.

I came across a number of documents in Spanish about Drake – the Spanish were great record keepers – and translated them into English to get the other side of the story.

Besides the fact that he actually accomplished as much as he did, I was surprised by the compassion he exhibited toward some of the peoples he encountered. He was not a conquistador, he was a thief, and a talented one at that.

A: I’m beginning another book about exploration and discovery, but one that is quite different from In Search of a Kingdom.

A: I first thought seriously about writing this book 20 years ago.