Karen Lynn Williams and Jessica Betancourt-Perez are the authors of the new children's picture book A Thousand White Butterflies. Williams's many other books include the new picture book Spirit of the Cheetah. She has been an instructor for Chatham University's low-residency MFA program in creative writing, and she lives in Pittsburgh. Betancourt-Perez, who is originally from Colombia, is a school psychologist in York, Pennsylvania.

Q: How did the two of you end up working together on A Thousand White Butterflies?

KLW: I was teaching a workshop in writing for children. I gave an assignment to write five sentences about a childhood memory. The students were to read the paragraph to a partner who shared the memory with the class.

When Jessica’s partner shared Jessica’s memory, it was obvious that the class found her story compelling. I saw immediately that the story had a beginning, a middle and an end with an arch to the plot for a simple story.


Back home at my desk I could not get Jessica’s story out of my mind. That is the kind of idea that an author needs to pursue, a compelling story that speaks to her passions.

I contacted Jessica and asked if she might be willing to work on a coauthored book. She agreed. We worked back and forth by email and phone and met again the following year to make the original five sentences into a story with a likeable character and a developed plot.

JBP: I believe that Karen and I were meant to meet each other. We met in a summer graduate course at Millersville University, a course I was not supposed to take at the beginning of my School Psychology program.

Karen was invited by my professor as a guest speaker for my class. I was very impressed with her presentation; the background experience with refugees that she brought to the class was amazing.

In that class, she had us do a writing assignment and I shared with a partner and then with the class about watching the snow for the very first time. Karen contacted me a couple days later and asked me if I was open to the idea of collaborating for a book. I said yes and after that, our adventure of creating this book started.

Q: What do you think the story says about immigration?

KLW: In writing this book I was reminded of my grandfather on my mother’s side who immigrated to the United States from Hungary. I grew up hearing tales about the difficulties he faced growing up outside of his own culture. Indeed, my two grandparents on my father’s side immigrated from England. But I did not know them as well as my mother’s father.

For me, A Thousand White Butterflies is a simple story about the loneliness of a young child in a new place without her father. It is also a story about being accepted and learning about the possibilities of a new world and coming to appreciate it in spite of difficulties. I am grateful to Jessica for sharing her story.

JBP: I think this story shows the reader the rollercoaster of emotions an immigrant child goes through when faced with moving to a new place.

Isabella is in an internal battle of what she anticipates to happen, which is going to school and making friends and what actually happens on her first day of school, it snows, school is cancelled and she sadly remembers what she left behind... her friends, papa, and beautiful country.

After all of that, what’s beautiful about the story is that it shows at the end that immigrant children are resilient; they use playing as a universal language to communicate, make friends and make a new life in the United States without forgetting where they come from. 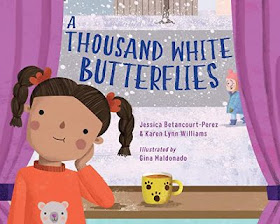 Q: What do you think Gina Maldonado's illustrations add to the book?

KLW: Gina’s illustrations bring the book to life. The details in the pictures add to the reality of life for the main character. The warm palette and details help young readers to understand the difficulties an immigrant can face.

The illustrations also help to broaden the story which is about an immigrant but ultimately about loneliness and friendship, a story anyone can relate to.

JBP: Gina’s illustrations bring Isabella’s story to life. The illustrations also show the reader details that are not said in words in the book.

For example, one of the illustrations shows the typical ruana of Colombia. The book does not mention anything about Isabella’s nationality, but thanks to that illustration the reader can guess which country Isabella is from.

Q: Karen, you have another new book, Spirit of the Cheetah. What can you say about it?

KLW: This is another book I coauthored with Khadra Mohammed. We also wrote Four Feet, Two Sandals and My Name is Sangoel together. Spirit of the Cheetah is based on a story Khadra’s father used to tell her when she was a child. Khadra is Somali. She grew up in the UAE. 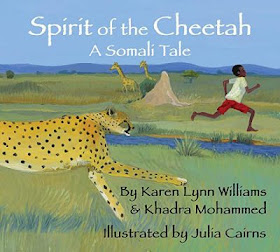 I was also influenced in helping to write this book by my youngest son who was a cross country runner at the time. His spirit captured my imagination along with Roblay, in the story, who must compete in a race to prove his manhood.

KLW: I am working on several projects currently. The Promise of Dragons is a middle grade chapter book and very different from anything I have written before. I like to think of it as a cross between Because of Winn-Dixie and How to Train Your Dragon.

Max is struggling with the death of his grandfather and the addition of a new baby sister to his family. To make matters worse he doesn’t have any ideas for his 4th grade first day of school project due soon.

When a dragon follows him home from summer camp his spirits pick up until he realizes the challenges of having a dragon for a pet. And the responsibility he has to save this endangered creature from those who might capture and harm him.

I have always gotten many ideas from living with my four children and now my grandchildren. The picture book Pumpkin to Pumpkin came to me when grandson Emery became so attached to his Jack-o-lantern he refused to throw it out even when it was turning to mush.

Nature and the cycles of life are passions of mine and so I have several projects I am working on that are nature themed. In fact, Pumpkin to Pumpkin is one of them.

JBP: I work full-time as a school psychologist and I spend most of my time evaluating students to receive special education services. I also do outside bilingual evaluations and translate documents for my current school district. However, I would love to have the opportunity to write another book in the near future related to my job or my own kids.

KLW: Speaking of nature-themed works, I am delighted to say that I have another book coming put with Charlesbridge Publishers in 2022.

Bear Helps the Forest Do its Work: And maybe you do too is a picture book about leaves and one of the mysteries of seasonal changes…and, well, about a bear who loves to jump in leaves. Maybe you do too.

Childhood and other cultures have also always been topics I am intensely interested in. I have lived in Malawi, Haiti, and on the Navajo reservation in Arizona. A number of my books grew out of these experiences.

I am also lucky to have had the joy of coauthoring with people from other cultures. They have expanded my world and added significantly to the fulfilling journey that is my writing life.

So my interest in other cultures and my work with refugees and immigrants, the books that I worked on with Khadra, my grandfather’s stories, led me to appreciate Jessica’s story. And too I love snow!

People have often asked when I would begin writing for adults. It was always my goal to write for young people. It has always felt to me that my childhood was and is the better part of who I am. I have great respect for the child in all of us and I gather hope from young readers everywhere.

JBP: A Thousand White Butterflies is truly a gift from heaven!!! I hope that many immigrant children feel identified in it and realize that they are not alone and that they can achieve their dreams.