Barry Joseph is the author of the book Seltzertopia: The Extraordinary Story of an Ordinary Drink. He is vice president of digital experience at Girl Scouts of the USA.

Q: You note that you were approached to write a book about seltzer after having written an article for The Forward about it. What initially inspired you to write the article, and had seltzer always been a big part of your life?

A: I wrote the product review for this new kitchen appliance, at the time called Soda Club (not Sodastream), out of purely selfish motivation: I figured it was my best way to get one for free. I had no idea it was the doorman to a rabbit hole (to mix metaphors) whose bottom I still have yet to find after all these years. Before the article I just enjoyed seltzer as a casual drink - 15 years later I [see] it as a fundamental element that binds the universe together.

Q: You worked on the book for more than a decade. How did you research it, and what did you learn that particularly fascinated you?

A: I went through different phases. My first phase was to interview people. I carried a recorder with me everywhere - during my work commute, walking down the street, at restaurants - and I interviewed everyone I could. I had over 100 interviews. I simply wanted to understand what seltzer meant to people, so I could understand how it fit into people’s lives. 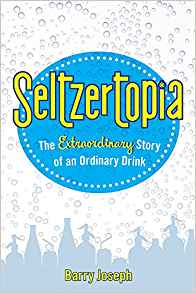 Once I understand the primary associations people had with seltzer (health, a tasty beverage, a comedic prop, and a lifestyle choice) I then began to research the history of those associations. This was before Google Books and that was slow going. I created a rich social media presence so people with knowledge would find me - a blog, a podcast, a twitter account, Facebook, etc. - and it worked.

People found me. A German lumberjack. A Polish marine archeologist. A Pennsylvanian seltzer work owner. And then all sent me material to help me understand the rich world of seltzer.

Then Google Books came out, and the world opened up to me. I could now read from the comfort of my home manuals from the 1890s for how to run a seltzer work, or run your own soda shop and the recipes you needed to have. I found 200-year-old travel logs visiting the historic town in German that gave seltzer its name.

And with Youtube I was able to explore seltzer TV jingles from England, and the infamous Original New York Seltzer made-for-MTV L.A. hotel seltzer jump.

Q: What would you say are some of the most common perceptions and misperceptions about seltzer?

A: Part of the fun of research seltzer was learning all the different things people associate with seltzer.

As I mentioned above, the first association came from how and why people first encountered and came to desire naturally carbonated water: at water resorts and healing spas. That association with health - for your body, for the planet - has never left.

And that lead to the desire to drink seltzer without having to travel to a spa. Apothecaries learned how to manufacture carbonated water, then add minerals associated with famous spas from around the world.

As customers expressed interest in better tasting drinks, seltzer shifted from a medicine for the elite to a beverage for the masses, whether on its own, with a sweet syrup added, or as the basis of a new line of beverages, now called sodas or pop, and later flavored seltzer (think LaCroix) or hard seltzer (think White Claw).

The third association grew out of seltzers use as a comedic prop, first on the vaudeville stage in NYC, then in Hollywood films (think Three Stooges) and television (think Howdy Doody); if you see someone holding a seltzer siphon in a comedy you know sooner or later someone is going to get spritzed in the face.

Finally, there are people who identify with seltzer as a lifestyle choice. And there are many: millennials, Jewish people, Argentinians, Hungarians; there’s all sorts of people who just wouldn’t feel whole without seltzer.

So those the big ones. The small ones? Siphons can be used to put out household fires. Seltzer can be used to get out a stain. It’s a good baking ingredient and if poured on your face keeps your skin young. It can be used as a weapon of war. On and on it goes. It’s remarkable how many ways we find meaning - rightly or wrongly - in seltzer’s sharp bite.

Q: Have your views about seltzer changed over the course of writing the book?

A: It had to. I knew nothing when I began. And I stopped the book because I had to publish it at some point, not because I had learned the whole story. Fifteen years later, I still learn something new about seltzer every month.
Q: What are you working on now?

A: I’m traveling the country telling the story of Seltzertopia. I call it SeltertopiaLive! I bring together all the amazing media I’ve uncovered - music, movies, television and more - to tell the story of seltzer. It’s super fun for me. Since I began the tour at the end of last year, I’ve presented it over two dozen times, with crowds as small as two to as large as 500, and everyone leaves just bubbling over.

A: While Seltzertopia tells the story of seltzer, going back centuries, its heart and soul lies in the portraits of contemporary people who have been touched by seltzer: seltzer delivery men, seltzer company CEOs, siphon collectors, seltzer work owners, and more. Their stories are quite moving, rather engaging, and are a collective case study of people whose lives are transformed by unexpected passions.