Deborah Tobola is the author of the new memoir Hummingbird in Underworld: Teaching in a Men's Prison. She founded the Poetic Justice Project, a theater company for formerly incarcerated actors, and she teaches creative writing and theater at the California Men's Colony. She lives in Santa Maria, California.

A: For most of the past 30 years, I have worked inside prisons, teaching creative writing and theatre, as well as working with formerly incarcerated people. I was compelled to write Hummingbird in Underworld because after a few years of working inside, I realized that most people have no idea what this almost invisible subculture is like.

When I first started working full-time in prison, it was like being dropped on another planet. I had to learn the rituals and lingo in order to successfully navigate the workplace. Because I’m a poet, language intrigued me. Luckily a friend and colleague decoded phrases for me, like rolled up, locked down, walked off. Prisoners get rolled up and locked down. Staff people get walked off—for serious transgressions.

Teaching in prison is the most difficult and rewarding work I’ve ever done. Every year, I produced an original play and was allowed to invite a small number of outside guests for a performance. Year after year, outside guests—including theatre people in the community—expressed joy, grief, gratitude after witnessing a performance. They were struck by the talent of the actors, singers, and musicians. I think many outside guests didn’t expect what they found in prison: beauty, despite the harsh environment. 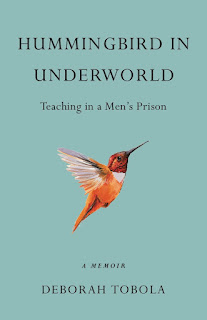 I chose memoir because it seemed the best way to tell the story. My father worked as a prison guard when he was going to college. In fact, he was chasing an escaped convict on the night I was born. Forty-five years later, I was hired by the same prison to run the arts program. In each chapter of the book, I take the reader inside prison but also on my own life journey.

Q: What do you think are some of the most common perceptions and misperceptions about U.S. prisons?

A: People might imagine that we lock up only the most dangerous criminals—brutish, hulking monsters who spend their time planning or committing acts of violence.

I discovered, the first time I set foot into a prison classroom in 1992, that most prisoners look like people in my neighborhood (except they are all dressed alike). Each one is someone’s father, brother, son. I have found students who are intelligent, thoughtful, motivated to learn. I prefer teaching in prison because the stakes are higher. The arts provide a lifeline for prisoners.

People of color, 37 percent of the U.S. population, comprise 67 percent of the prison population. Most disturbing, black men are six times as likely to be imprisoned as white men. (These statistics come from The Sentencing Project.)

I think there’s a growing awareness that we need to redesign our criminal justice system. What prisons are best at is creating the need for more prisons. Partly that is because of recidivism. About two-thirds of prisoners return to custody within three years of release. If we are really interested in “corrections,” we should create environments that allow people to engage in activity that will lead to successful re-entry. We can look to Scandinavian countries as a model for that.

A: Hummingbird in Underworld comes from a poem of the same name, about the transforming power of the arts in prison. Here are a few lines from the poem: “Hummingbird sucks the evil out of men, leaves them/with a thirst for beauty and the trick of flying/while appearing to stay perfectly still.” I think there’s an echo of canary in a coal mine in the title. Artists, wherever they find themselves, are sensitive to their environments and often the first to point out trouble.

A: The ring of truth.

A: I’m working on another memoir, this one about Poetic Justice Project, a theatre company for formerly incarcerated people that I founded in 2009. I’m not sure of the title yet.

A: There’s an excerpt from the book called “Dream Prison” on Medium, and more information about Hummingbird in Underworld on my website, deborahtobola.com.