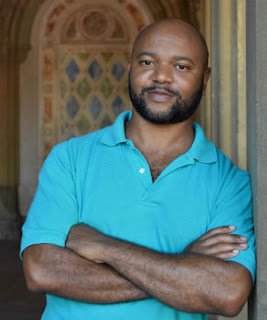 De'Shawn Charles Winslow is the author of the new novel In West Mills. He lives in East Harlem.

Q: How did you come up with the idea for In West Mills, and for your character Knot?

A: My mother grew up in a town called South Mills, and the immediate section where she was raised was very close-knit. It’s where I got the idea for the fictional “West Mills.”

And the character of “Knot” came to me because, as a child, I knew a woman whose nickname was “Knot.” She was a well-respected friend of the family. She passed away when I was 10 years old. Though Knot struggled with alcoholism, she was a very kind and independent person.

I created “Azalea ‘Knot’ Centre” to sort of fill in what I didn’t know about the real Knot.

Q: The novel takes place over more than four decades of your characters' lives. How did you decide on the time frame, and did you need to do any research to write the novel? 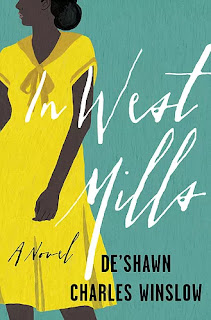 A: I thought it was necessary for us to see the main characters as young people so that we could see how, or if, they changed over the years. Also, if I had chosen a shorter scope, there would have had to be quite a bit of flashback to show what they’d been through. I wanted to keep the flashbacks short, even if there were a fair amount of them.

At one point, I was going to set the novel in the real town of South Mills, N.C., and I did quite a bit of research on the town. But when I decided that a fictional town would be better (so that I could play with location, etc.), I ended up setting all of that data aside.

All other research I did was minimal. I simply Googled what was going on in the world during some of the novel’s years, and I sprinkled some of it throughout. Turning the project into a history lesson was something I didn’t want to do, so I kept it light on the research.

Q: The novel takes place in a small town in North Carolina. How important is setting to you in your writing?

A: Setting has turned out to be more important than I thought it was in my writing. Since I tend to write about characters who have close ties to the people who live near them, my work almost has to be set in a place where that type of community exists, and is normal.

While people living in major cities have a sense of community, it’s very different from the type I grew up in the South, where a certain degree of nosiness is permitted—expected, actually. And even though I’ve lived in New York for most of my adult life, I don’t believe I could have written a city version of the novel.

Q: A Nylon review of the book says, "...he skillfully weaves together a story of the power of love and friendship, and their ability to redeem even the most troubled souls." What do you think of that assessment?

A: My goal was to show that we can love and care for people even we don’t fully like them. The ability to love is almost involuntary, and I believe it’s something that lives in all of us. I am glad my belief came through in my pages.

A: I’m working on a second novel. It’s also set in the fictional town of “West Mills.” While a few characters from In West Mills will make a splash, there will be a cast of new characters to meet.