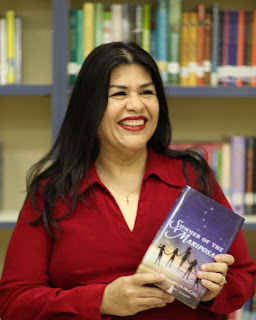 Guadalupe Garcia McCall is the author most recently of the young adult novel Shame the Stars. She also has written Under the Mesquite and Summer of the Mariposas. She is a high school language arts teacher. Born in Mexico, she moved to Texas as a child.

Q: You note that you were inspired to write Shame the Stars after learning from your son about events that happened in Texas in 1915. How did that lead you to write the novel, and how did you create your characters Joaquín and Dulceña?

A: Joaquín’s character came to me fully formed the night I read Revolution in Texas by Dr. Benjamin Johnson (the book my son gave me to read). Joaquín woke me up in the middle of the night to tell me I needed to get up and write his story. It was very much like a “visitation” in that I could see him in my mind.

At first, it was just him, telling me about Rancho Las Moras, his father’s friendship and faith in the Rangers, and his love of Dulceña. The names came from him as much as the story did. The conflict, the moral dilemma that he is facing, all came from him. It’s the rest of the story, the scene by scene action/reaction, that came from me and my research. 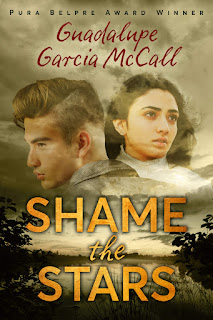 Q: What kind of research did you do to write Shame the Stars?

A: Once I had Joaquín’s story down, which he gave me in the form of long, narrative poems, I went back and did more research. I went to the Library of Congress online database and read newspapers of the time, printing out headline and after headline, because they were pieces of the puzzle for me.

These headlines beefed up my plot, twisted it and shaped it into something that tried to paint a picture of the rebellion that spawned La Matanza of 1915. I also read many nonfiction books about the Mexican American experience in the United States.

Something else I did was visit the Bullock Museum which, at that time, had an exhibit called “Life and Death on the Border” which centered on the Matanza. 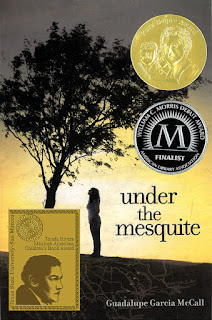 I read every marker and took pictures of every artifact because the authentic objects, like Pancho Villa’s saddle and a bride’s wedding dress, fed my story. They were physical manifestations of the narrative Joaquín wanted me to tell.

They were proof that what Joaquín was saying was true. I was being called to action. The story had been consigned to me and I felt blessed and honored to be entrusted with it.

A: I hope that readers see that our history, the Latino experience, in this country has been filled with struggle and conflict, but also that we are gente buena. We are human beings with blood in our veins and love in our hearts.

I hope they see that we are so much more than the stereotypes which movies and hateful rhetoric would depict. Latinos are part of the American fabric. We live in various parts of the country and move within many social, political, and economic circles. 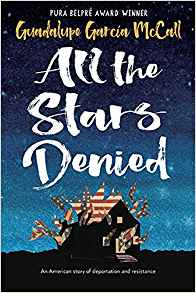 To believe the stereotypes is an injustice to us and to themselves. As Latinos, we’ve suffered much, but we’ve never given up on our country. We are Americans through and through.

Q: You've written a sequel, All the Stars Denied, which will come out later this year. What can you tell us about that book?

A: All The Stars Denied is the story of Estrella, the fifteen-year-old daughter of Joaquín and Dulceña. Estrella is a spirited girl, a child of privilege, who understands that her parents and grandparents struggled and lost much for her to live in comfort and safety.

As a descendant of heroes and sheroes, Estrella longs to live up to her family’s legacy. She wants to impact the world in a positive way.

But when she leads a peaceful march against the hateful slogans that appear in every door and window of the businesses on the White side of town, her family is targeted for repatriation, the deportation of over one million Mexicans and Mexican Americans from the U.S. 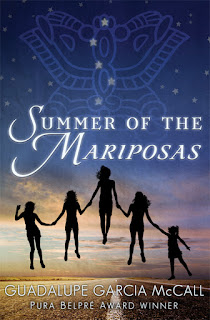 Estrella and her family are rounded up, separated, and dropped off on the other side of the border without the means to survive, much less return to their home.

Like her father, Estrella is a poet, but her poetry is filled with imagery from the natural world, the foliage and fauna of South Texas, where she knows she and her family belong.

There’s a Borderlands Kaiju YA novel I’ve been stirring around that I really like. There’s the finished, much beloved stew I like to call my Grand Dish, a Borderlands Gothic novel, which I think has a lot of promise and I hope to make into a proper dish someday.

There’s also the tender little petit-fours which I can’t seem to master just yet, picture books, I’m trying to perfect. It’s slow going, but I have faith. There’s lots to do, lots to play with, so I’m happy. I know these things will feed me. I just have to stay in the kitchen and keep cooking.