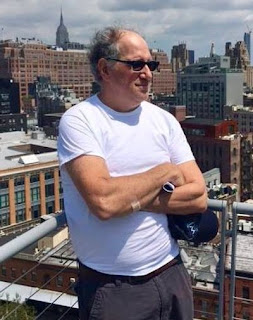 Barry Wittenstein is the author of the new children's picture book The Boo-Boos That Changed the World. He also has written Waiting for Pumpsie. He lives in Manhattan.

Q: How did you come up with the idea for The Boo-Boos That Changed the World?

A: About 10 or 15 years ago, I made a little book (three inches by three inches!) of Photoshopped images in the shape of adhesive bandages. Just for fun. All those filters that everybody has on their cellphones today, back then, Photoshop was the king.

So, I made about 50 images. From that point, I thought I’d research a bit about how the product came to be. My little book would have a story! But I also was interested in the common usage of the cliche, “put a Band-Aid on a problem.” Meaning, not a real or long-term solution. So, that’s the genesis.

Fast forward to 2015, for some reason I don’t even recall, I picked up the idea again. This time, what I found interesting upon reading was that each time I thought the story of the invention was over, there was another wrinkle. Now, why did I come up with the usage of “The End” joke?  I think it was only on the first page initially. Then, during the rewrites, I saw that as a comedic theme. 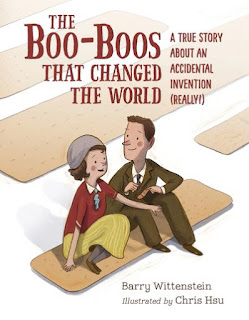 A: As with any of my nonfiction books, it’s dive into the Internet using different search terms. Also YouTube for the old commercials. I also found a video segment on CBS’s show Sunday Morning where they visited the company and interviewed a spokesperson. It’s just plow ahead. I also bought a few books on the history of Johnson & Johnson.

Finding info about Earle and Josephine required a lot of detective work. You learn a piece here, another piece there. Then, of all things, Earle was posthumously inducted into the Inventor’s Hall of Fame. When I saw THAT, I knew the stars were aligning.

In terms of being surprised, everything about the events surprised me. I had no clue how adhesive bandages came to be. I just found it hilarious how they thought they figured out how to produce it, the right size, and thought they had a real marketing plan, only to see zero interest. Of course, as I wrote, giving the bandages away was genius!

Q: What do you think Chris Hsu’s illustrations add to the book?

A: Chris’ illustrations are fantastic! Did you know this is his first book? His illustrations raise the level of my words, and provide a deeper understanding. Does that make sense? He brought my words to life. 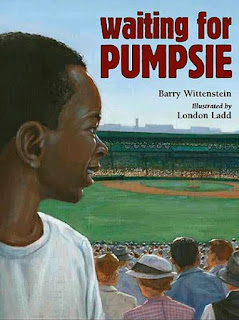 I understand he did a good amount of research, as well, into the styles of clothing, store signs, cars. He nailed it. He did an amazing job, and I’m sure he’ll be in demand sooner than later.

Q: Who are some of your favorite picture book authors?

A: I love the work of so many. Anything by Melissa Sweet, Drew Daywalt, Jon Klassen, Andrea Davis Pinkney, Shel Silverstein, Mo Willems, Jacqueline Woodson, Amy Krouse Rosenthal…that’s just off the top of my head.

A: Since I’m only working on nonfiction, I don’t like to talk about the subjects I’m currently pitching or researching. Paranoid, you say? Might be. But it also takes so long to find a unique story that I feel I can explore, and then what style to explore?, that I’m just SCARED!!! OK, I’m scared!! Paranoid and SCARED!

But, I will tell you that I have three additional manuscripts under contract. One is about MLK and the March on Washington, another about a famous jazz saxophonist, and a third about a store. Two come out in 2019, and one in 2020.