Amanda Searcy is the author of the new young adult novel The Truth Beneath the Lies. She works for a public library system, and she lives in New Mexico.

Q: You've noted that The Truth Beneath the Lies was inspired by a real set of crimes. What did you see as the right balance between the actual crimes and your own fictional characters?

A: My stories are inspired by real events, but I never intend to write a "ripped-from-the-headlines" book. With The Truth Beneath the Lies, I used real life as a starting place and then brainstormed and created the fictional story. By the time it was all said and done the world Kayla lives in and her general circumstances were really all that was left from the original real events.

More than anything, I want to be respectful of the families who have gone through these terrible tragedies. I would never want anyone to pick up my novel and think it was about their loved one, so whereas real life might give me the original idea, the finished product is completely fictional (and hopefully only recognizable to me as being based on real events).

Q: Did you plot the entire book out before you started writing, or did you make many changes along the way? 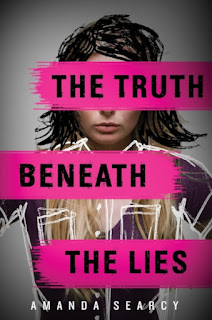 A: I wish I had plotted it out ahead of time! That’s something I learned from this book: if you are writing a thriller, having a strong outline before you start makes your life a lot easier. With The Truth Beneath the Lies, I knew how it ended and what happened at about the mid-point, but the rest I wrote as I went along and then had to do A LOT of editing.

A: This novel actually went through several title changes. It was originally called “Truth Is” which was Kayla’s catch phrase. Most of the times she said it were edited out so the title made less sense.

For a very short time it was called “I’ll Find You”, but then we settled on The Truth Beneath the Lies. It was a team effort coming up with that title, but it is absolutely perfect and beautifully sums up the story and what I was hoping to achieve with it. 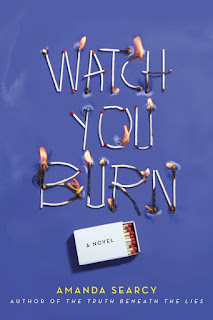 A: My next YA psychological thriller, Watch You Burn, comes out on October 23! It’s about a girl named Jenny who has to move across the country with her dad because the cops are on to her, and the only way she can protect herself is by going far away and staying out of trouble.

But even after she moves, Jenny still gets the itch. The itch to light a match and then watch it burn.

It's something she hasn't been able to stop, ever since an accident years ago. She soon discovers that the woods around the motel are the perfect place for her secret activities, but then she realizes someone is following her and watching her every move.