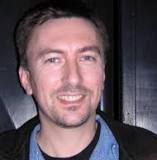 Philip O Ceallaigh is the translator of the novel For Two Thousand Years, by the Romanian writer Mihail Sebastian (1909-1945). The book focuses on a Romanian Jewish university student. O Ceallaigh's other work includes two short story collections, Notes from a Turkish Whorehouse and The Pleasant Light of Day. Born in Ireland, he lives in Bucharest, Romania.

Q: How did you end up translating For Two Thousand Years, and what was the process like?

A: I'd love to say I immediately saw it being greeted as a lost masterpiece, being taken up by mainstream publishers, getting serious treatment both sides of the Atlantic, repeated print runs - all of which has happened - but that would be a big fat lie.

In 2004 a friend handed me a nondescript paperback of a novel that had disappeared under communism and had been brought out in the 1990s by a small Jewish-interest press in Bucharest. I'd never heard of the author and I rarely read Romanian fiction, because I rarely found it rewarding.

But For Two Thousand Years gripped me, and perhaps precisely because of its understated, reflective and intimate style; much of the fiction I like has the sound of a writer working through something primarily for his or her own self, rather than seeking to dazzle a readership. This was the perspective of a particularly perceptive outsider, observing life around him.

So I identified very strongly with the writer. It was a very personal thing. I admired Sebastian's writerly vocation, his lucidity and solitariness. Had I met Sebastian I would have wanted to be his friend, to spend time speaking with him, and, and I began translating his book for the same reason - I wanted to be closer to this character I admired.

But there was another level at which the book affected me deeply. This was a book that in many ways foresees the rise of totalitarianism and if it doesn't predict the Holocaust in its scale (I don't think anyone did predict that) it was in no doubt that a time of pogroms and repression was not far away.

The lived experience was represented in this supposed work of fiction in For Two Thousand Years set me learning about the - relatively recent - history of the place I lived, in a climate where the accepted history was... fiction.

I was translating just for myself, so I took my time. Three years. Then when I was finished, I thought, well, I should try to get this odd book published, maybe there'll be a few people like me, interested in this nook of history. 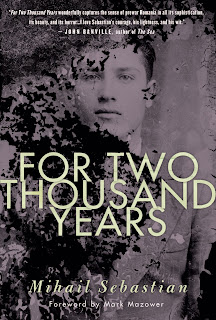 I was convinced it was an important document and that at the very least it should be accessible outside of Romanian, for academics at least. For a couple of years I tried all kinds of presses, mostly small ones, in four different English-speaking countries. Nobody was interested, so I put it in the drawer for five years.

Then in 2014 I was contacted by an editor at Penguin Modern Classics in London who had read an essay I'd written about Sebastian and asked to see the manuscript. And now it's been published in the U.S. by Other Press, with its reputation preceding it and with a very good foreword by Mark Mazower.

Q: What do you think the book says about the situation for Jews in Romania during the years before World War II?

A: They were highly vulnerable, that is what the book tells us, even without the benefit of hindsight. But it is easy to forget, because of our knowledge of what happened to "the Jews" that there was no single Jewish community. In important ways, the creation of "the Jew" was the work of the anti-Semites. It's hard to imagine a more diverse set of communities.

Romania, between the wars, was made up of the fringes of three empires that had dissolved - the Ottoman, Russian and Austro-Hungarian. It was where the Sephardic and Ashkenazi worlds met and mingled. 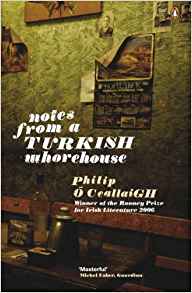 The oldest Jewish communities, in the south, were Spanish speaking Sephards who came up from the Mediterranean. The Yiddish-speaking "Polish" Jews came in numbers in the 19th century, and with time the two groups mixed and communicated in Romanian. Greater Romania, after 1918, then took in Basarabia, which had been part of the tsarist pale of settlement and had many poor shtetl Jews.

The Habsburg lands of Transylvania and Bukovina were home to urban Jews who spoke German or Hungarian. So there were differences of language, wealth and assimilation and the impossibility of any concerted response to the challenges they faced.

The unnamed narrator, the assimilated Romanian, captures something of this in his portrait of Dogany, who is from Transylvania and identifies as a Hungarian.

There is Sulitzer, the Yiddishist, who argues for a living, united Jewish tradition based around language (one the narrator cannot speak) and is repelled by the Zionists for trying to replace it with Hebrew.

There are the Zionists, trying to construct a secular Jewish identity, rather in imitation of the nation-mania of the Romanians and others (but also perhaps to save their own lives), who are in turn repudiated by S.T. Haim, who argues that they are no better than Mussolini in their emphasis on nation, and it is all a capitalist distraction to divide and conquer the working class...

Had these communities not been violently obliterated so soon after the writing of the book, it would be funny that the nationalists could have perceived them as a concerted threat to the nation.

Q: What do you see as Mihail Sebastian's legacy as a writer? 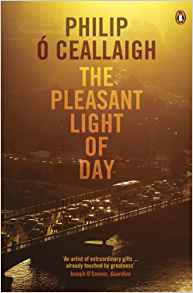 A: That he registered such madness at such a chaotic, unstable time with such measured clarity. He is not a journalist, a diarist or a novelist. He wants to be the calm point from which the disintegration is observed.

He succeeded in doing this, his work becomes of universal value. It seems to have a particular resonance because we are only beginning to comprehend the 20th century, the utter collapse of civilization, the abyss in which the Holocaust and the Gulags became possible.

Q: What does the book's title signify for you?

A: The 1930s was an age of sudden technological development - air travel, cinema, radio - and belief that the future could be directed, that human beings had the power to bring something new and extraordinary about.

It was the same enthusiasm and naiveté the produced fascism and communism. Communism was a utopian project, fascism a mass fantasy that a messiah would arise and lead a race or nation to a glorious new stage of development. They are the illiterate dreams in some ways of people dazzled by their own technological toys and ideological theorizing.

Against this there is the Jewish experience, and it is something of an antidote. That for two thousand years history has repeated itself. There are pogroms and there are the pauses between.

A: I'm nearly finished a collection of essays, mostly about Jewish writers in Eastern Europe and the Holocaust, a work that was ignited by having translated Sebastian, and shows all the signs of being unpublishable. But there is a little more work I'd like to do on it before I put it away in the drawer and let it go.

It sounds like a heavy project and it is, a lot of research, but I started writing it when my daughter was born and she's now five, and its always a reminder to me what a fortunate time and place for her to come into the world, in Romania. No wars, famines, dictators, genocide! For now, anyway...

But I'm not a professional translator. I think of it as a demanding hobby, something like rock climbing. I don't want to be there all the time, but when I'm there it takes all my attention.

I want to get back to writing short stories. I have another collection nearly finished, and at a certain level everything else I do starts to seem like a distraction if I can't write a story. I need to get away from historical research, rock climbing, clear my desk and get back to my real work.

A: Yes. I enjoy the impact For Two Thousand Years has had all the more for the years no English-language publisher would touch it. It's a reminder that some things take time. I'm lucky to have been able to give my time to some things I love and enjoy.