Frances McCue is the author of the new poetry collection Timber Curtain. Her other books include The Car That Brought You Here Still Runs and The Stenographer's Breakfast. She was the founding director of Richard Hugo House in Seattle from 1996-2006, and is a senior lecturer at the University of Washington.

A: Thank you for asking about Timber Curtain!

In one way, the book was written in two years and in another way, it took 20 years to write it.

For the last two and a half years, I’ve been working on a documentary film about the tear-down of a beloved old literary arts building in Seattle, a place where I used to live with my husband and daughter. I started writing poems as a sort of soundtrack for the film and they grew into a verse narrative of its own.

Timber Curtain roared out of the “triggering town” (as the poet Richard Hugo would call the initiating seed of a poem) of that film and they have their own life.

Also, in the mid ‘90s, I was immersed in the study of architecture and I’d been making poems in response to Walter Benjamin’s Arcades Project and Baudelaire’s flaneur poems. Those poems about 19th century Parisian glassed-in corridors, set in a series, shaped a glass passage, both in subject matter and in the structure. 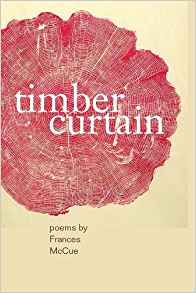 I’d left that project behind but the poems rolled around inside me for awhile and then they found new forms and openings. My poetry books are mini-novellas— I’m always interested in having a story driving the accumulation of images and forms.

Q: Why did you focus at least in part on the Richard Hugo House in your new book, and what impact did it have on you?

A: That building is a stand-in for a long dialogue in urban history: the artist vs. the developer. Hugo House defies the stereotype of being a victim of the evil developer who takes over the world of  “hapless” artists who act as “gentrification wedges” that begin the process of upscaling a neighborhood, displacing the artists.

Hugo House lost its old building to demolition and reconstruction but the development, in this case, is a good progression because the organization, Hugo House, will go on; it will continue in a beautiful new building on the same patch of land. The developers are actually philanthropists. I love stories that defy the easy divisions of the world and this is one. 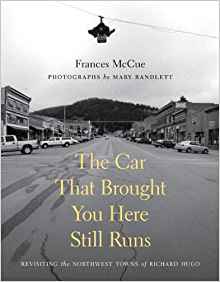 The other reason that Hugo House is a rich subject is that we loved our time there. I worked as the founding director for 10 years and for some of that time I lived down the hall from my office. It was like being the baker who lived above the bakery.

Q: What themes do you see linking the poems in the collection?

A: Migration and sanctuary themes fill the book— certainly the outside world is filtering into my little story of one old building and ideas of displacement and loss.

Another theme is the making of artists— my daughter appears as a child who is living in the building and who is making art amidst older artists. Ghosts appear as well— and they sort of float from their little nests in the old building and lift over the demolition wreckage, looking for home.

And lastly, erasure is a core theme— the erasure of a city, my husband’s death as the erasure of part of a family, the demolition of our beloved place… 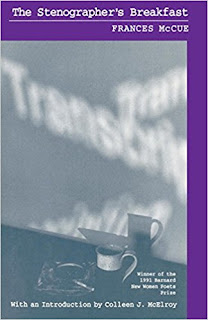 In the book, erasures often appear as censorship marks— In our current political age where the truth is hidden from us— I’m interested in how erasure appears physical and psychological forms— just as buildings are suddenly taken down, and our sight lines are forever changed. Our memories, too, are forever altered.

Q: How was Timber Curtain chosen as the book's title, and what does it signify for you?

A: For a long time, I’ve been noticing the line of trees left after a logging sweep. The line forms a curtain that partially blocks a clear cut.

I created the term “Timber Curtain” and wrote a “fake” definition: "Timber Curtain. (n.) 1. The name given to a line of trees left after a logging sweep. Origins: Pacific Northwest, mid- to late twentieth century. Strung along the long roads of the Olympic Peninsula, the lines of trees were left to block sightlines of the clear cuts. 2. Urban version: “façademies” (rhyming with lobotomies), the use of façades of old buildings as a decorative “curtain” for new, less ornate and often cheaply-made structures. See also: Façadism.”

In the book, I play on the notion of curtain— it becomes a theater curtain and the poems go back and forth between the constructed theater in the city and the timber curtain in the forest. Both are blocking and presenting performances of a sort.

A: A little collection of book blurbs in collaboration with Timea Tihanyi, a visual artist who makes porcelain books. I’ve been writing blurbs for these un-openable ceramic books. Also: a nonfiction piece on pilgrimages and falling in love.

A: I’m so excited to actually see the book— it has amazing fold out pages that are imitations of buildings— a facademy, I call it, when a new building is inserted in the facade of an old one.

I did that in verse by writing a long column that I inserted within a scooped out shell of a poem that appears earlier in the book. I kept the first and last words of each line in the early version and shoved the column poem inside so that it could be read across and down.

I can’t wait to see how this looks and feels in the book when it falls open in my hands. The reassemblages of poems from previous ones is a fun enterprise and physcical book emphasizes that.

Also, the film that accompanies the book is called Where the House Was and it will come out in the next year. You can see the trailer here.