Jabari Asim is the author of the new children's picture book Preaching to the Chickens: The Story of Young John Lewis, which focuses on the childhood of the civil rights leader and congressman. Asim's other books include Fifty Cents and a Dream and Only the Strong. He is the executive editor of The Crisis and is an associate professor at Emerson College. He lives in Newton, Massachusetts.

Q: You write that you first learned about John Lewis's preaching to his chickens from his autobiography. At what point did you decide to write a children's book about it?

A: Many years had passed by the time I decided to try it. I’ve been wrestling with various children’s projects that focus on the childhoods of important African-American historical figures.

After we found a publisher for Fifty Cents And A Dream (about young Booker T. Washington), I began to work on Preaching in earnest. 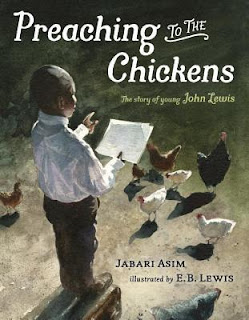 Q: What qualities did the young John Lewis depicted in your book have in common with those of the John Lewis who went on to become a civil rights leader and longtime member of Congress?

A: In both his civil rights work and his work in Congress, Rep. Lewis has combined a willingness to speak on behalf of the underserved and to engage his opponents with compassion and civility.

At the same, he has never hesitated to speak truth to power. One could argue (and he has suggested) that some of his early childhood experiences helped shape the man he became.

Q: At what stage in the book's development did you see E.B. Lewis's illustrations, and what do you think they add to the book? 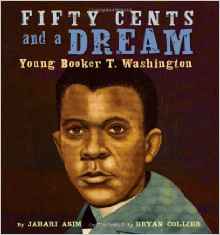 A: They _make_ the book, in my view. Our editor had done the principal editing on the manuscript by the time I saw E.B.’s initial work. I was a longtime admirer of his illustrations and looked forward to seeing what he would do.

His art both interprets the text and complements it, with results that are both poignant and dazzling. He has created a number of masterpieces, and I’m hopeful Preaching to the Chickens will join their ranks.

Q: Has John Lewis seen the book, and what does he think of it? 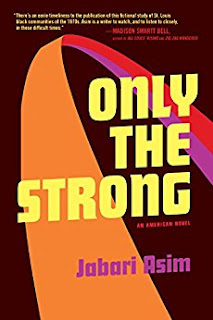 A: To my knowledge he hasn’t seen it. I hope he will find it worthy.

A: I have a collection of poetry due out soon. It’s called Sing It Like A God. After that, I have a couple of children’s projects under contract that I need to get cracking on. I can’t say much about them until they are complete.

A: I’m devoting more energy to writing plays while also working on my next novel. I’ve finished a pair of scripts and will be looking for homes for both.

--Interview with Deborah Kalb. For a previous Q&A with Jabari Asim, please click here.
Deborah Kalb at 6:45 AM
Share