Sarah Wildman is the author of Paper Love: Searching for the Girl My Grandfather Left Behind. Her work has appeared in a variety of publications, including The New Yorker, The New York Times, and Slate. She lives in Washington, D.C.

A: Paper Love isn't actually a family memoir - in fact, I tend to call it an "unfamily" memoir as it's about the life my grandfather didn't choose, the family he didn't have.

It's a search story, a love story, an investigation into family myth and memory. I found a folded note - of the kind we all used to pass in the pre-texting era - in each quadrant was a “selfie” of the 1930s, a photograph of a girl, and under each was a caption - she wanted my grandfather to write to her. It was dated 1939.

In many ways I have always seen myself - as so many of us do - as an accidental American, here on these shores because of the apocalypse of the 20th century and the (often daring!) choices my grandfather made as the Nazis took over Vienna, Austria, where my family lived then. That history has been a part of my consciousness forever, since I learned my name.

I owe my life to my grandfather's escape. There was, for me, something profound in knowing that, both as a child and today.

Filling out the details of his story, writing through the holes he left in his narrative, was really about understanding who I am, and how to explain who we are to my children.

For all of us I think there is a need to understand these major shifts of history at the moment where memory is becoming history. We are losing the generation that knew the war - our grandparents, and, for some, parents.

The questions of xenophobia and racism though, that were at the heart of the Nazi effort to not just exterminate but to erase an entire people, are still with us.

I think we must look at these stories so as to understand that these were stories of individuals, and not just nations; of families, and not just an ethnic or religious group.

When we connect the stories of the personal, the individual, we can relate to history not as distant, but as near to us, and learn from it, as well as remember it.

What had happened to her? Where did she go? And why didn't she go with him? These questions came up for me immediately. 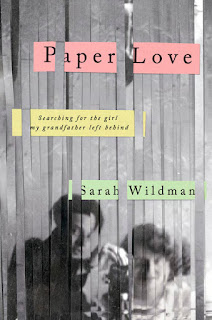 Her letters offer a lot of information - the places she wrote from, the many places she lived, and where she worked - but they were also censored so to fully understand what was happening, I needed to match up her letters with the restrictions Jews were under in the Reich, and to find the material the state had kept on her.

The search for her took me to Austria, Germany, the Czech Republic, Israel, the UK, and this country. I went to archives, and I walked the streets she walked, sought out the buildings she worked and lived in - I wanted to 'see' her world as much as possible.

I had never really considered what his world had looked like, before he fled. This book opened that up for me, completely.

Who were the people he went to school with? What happened to them? It was an incredibly modern world. It was an extraordinary situation, but it felt very relatable. What happens when everyone you've ever known has scattered, or dies?

What I discovered in the archives, and through these letters, was that he had nothing under control when he arrived on these shores. That he was terribly poor. That he nearly failed.

Q: What has the reaction been to the book?

A: I've been really humbled by the response to the book: I've received dozens of letters from readers who see themselves, and their family's stories, in the search - which is something I very much hoped might happen.

A: I work on stories on the intersection of culture and politics, history and memory - stories that speak to identity, and who we are now, and how we got here.

My hope was by telling, as fully as I could, the story of one small group of people, I could do something to un-erase them from history.

It's not a word! I know! but it was really that - to take this one, normal, incredibly intelligent woman, to let her really be heard, to allow her to have a bit of a voice in history, to show you how incredibly important she became to me.

I also think we should not rest on the idea that this happened long ago, or to another people (if you are not Jewish, of course). Valy was marginalized, demonized, and reviled for her religious identity.

Imagining how bewildering and horrifying she would have found the experience is not hard. I believe it is important to consider: how does society continue marginalize, to reject, to select out?

Today - knowing as I do now the debates in the U.S. State Department in the 1940s over whether and when and if to take in refugees - it is hard not to relate to the moment we are in right now.

For many years we have discussed "what did people know? and when did they know it?" Did Roosevelt know of the destruction of the Jews? of the clamoring of refugees?

Today with horrifying images of young children dying at sea and piled up in Keleti station in Budapest and desperate to arrive in Europe - we know what is happening. Our twitter feeds, our Facebook pages, our newspapers are filled with images of desperate families.

--Interview with Deborah Kalb. For a previous version of this Q&A, please click here. Sarah Wildman will be participating in the Temple Sinai Authors' Roundtable in Washington, D.C., on February 27, 2016.