Michael S. Green is the author of the new book Nevada: A History of the Silver State. His other books include Las Vegas: A Centennial History. He is an associate professor of history at the University of Nevada, Las Vegas.

A: It depends in part on which section of Nevada you're talking about. For the tourist cities of Las Vegas and Reno, and especially Las Vegas, many still think life ends where the main resort areas end.

That problem certainly is improving, and the attractions beyond the Strip and downtown Reno are many, but there's also an extremely diverse population dealing with the same kinds of issues that confront others throughout the country.

In rural Nevada, the perception is correct that it's strongly anti-government and heavily tilted toward mining and ranching, but the idea that Cliven Bundy exemplifies that way of life is wrong; a significant number of his fellow ranchers resent his behavior, and there is a well-educated core in the rural areas.

I think a lot of those outside the state continue to think and possibly hope that organized crime still plays an important role in the casino industry. There's no evidence that it does, but if the belief that it does attracts tourists, don't tell anybody! 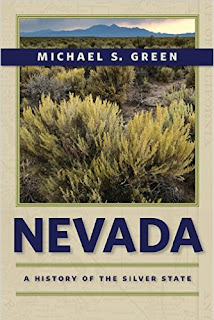 A: I had written a middle school-level textbook on Nevada, and a history of the coming of the Civil War for a series whose authors were to write syntheses, so I certainly was familiar with the idea of writing something different than the more traditional monograph.

I suspect that anyone who has written a general introduction to a subject, no matter how in-depth it is, will understand what this means: I started researching the book when my family moved to Las Vegas in 1967, when I was two.

Not formally research it, of course, but I started teaching Nevada history in 1987 and did it off and on for the community college and the university for a few years. From 1995 to 2014, I was full-time at the College of Southern Nevada, and taught 2-4 sections of it each semester.

In that sense, I was researching the book by teaching the subject, constantly digesting it, and learning, in turn, from my students about what interested them, what they knew about Nevada history, and what they--and I--didn't know about it.

I also published books, scholarly articles, and popular articles on the state's history over the same period of more than a quarter of a century.

So while I wasn't researching this particular book for most of that time, I was researching Nevada, and doing it in traditional and not-so-traditional ways.

Yes, I spent plenty of time in archives and scrolling through microfilm and even doing formal interviews. But I also had to be a string saver.

A significant amount of Nevada's history went unwritten, not just because few miners and other workers kept diaries, for example, that were available to me, but with so many in the gaming industry originating in organized crime or illegal gambling, they developed the habit of writing down as little as possible. This has meant a lot of listening and pondering and extrapolating.

In terms of surprises, one of them was good for avoiding excessive egotism: I learned how little I actually know! This is due partly to the lack of historical writing about significant chunks of Nevada and its history.

For example, there is one major scholarly history of Reno, and another that compares it with Las Vegas, but for some large parts of Reno's history--especially its ethnicity and diversity--I had to rummage around.

But it also has to do with realizing something about how we teach, especially at the college level. I have used textbooks on Nevada and they were especially good on what happened up to about 1900. So I tended to leave a lot of that material to the books.

Well, when you write a textbook, you don't get to leave it to somebody or something else! You can't hope to get ALL of it in there, but you certainly can't ignore components of it.

I also was surprised by the extent to which mining is still so important to Nevada. While I knew that it played an important role, we need to be reminded of how significant an industry it remains to this day. 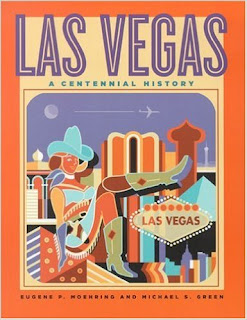 Q: You write, "Luck has shaped Nevada." In which ways?

A: Some years ago, Marc Cooper, then writing for The Nation, interviewed me and asked me to sum up Nevada in as few words as possible, and luck struck me as a useful way.

Some of it has been what might be called dumb luck that benefited Nevadans: that travelers to and from the Gold Rush and prospectors in the central part of the state found ore, that Nevada happened to have the right climate and location for federal projects, etc.

Some of it has been the quest for luck: gamblers in particular, but also miners. As Ralph Denton, one of the people to whom I dedicated the book, liked to say, optimism is eternal in the prospector's heart. So it is with gamblers, even though the odds are heavily stacked against them. But they kept trying and keep trying.

Q: Looking ahead, what do you see for Nevada in terms of its people and politics?

A: As a historian, I'm tempted to say that if I knew that, I'd be in the stock market (unfortunately, that's where some of my retirement account is!).

The changing climate will have an effect, but so will our (I use the possessive as a Nevadan) ingenuity and intelligence.

Another limitation is whatever is going on elsewhere: Nevada is one of the last states to pull out of the recession, and suffered a great deal with the reduction in travel after September 11, 2001; now corporations that went full-throttle into Macau are feeling the effects of the Chinese government's crackdown on corruption and economic issues. How the world and national and regional economies do in years to come will shape Nevada's future.

I do expect the continuing diversification of the population. The number of Hispanic people moving to the area, and those who have moved here expanding in population through natural growth, figures to continue and to reshape society, culture, and politics. We pay too little attention to the influx of Asian people, and they, too, will continue to come to Nevada.

The state is at a crossroads in terms of political ideology. A Republican governor with a Republican legislature pushed through a desperately needed tax increase, thanks to some of the Republicans and the unity of legislative Democrats. Now some of the more right-wing Republicans are trying to repeal it.

One of the main reasons that some anti-tax Republicans went along was the realization that Nevada's attempts at economic diversification suffered for the lack of progress in the state's educational system.

Problems remain and will continue, of course, but if Nevada's traditional anti-governmental attitudes prevail, Nevada will become even more dependent on tourism and mining, and suffer accordingly.

A: Recovering from the textbook! Actually, I always have too many projects going.

I am in varying and mostly early stages of work on three books: a history of the Great Basin in the 20th century for the University of Arizona Press, a history of organized crime in America for Rowman & Littlefield, and a book on Abraham Lincoln and Native Americans for Southern Illinois University Press.

The latter project will get me rolling on a bigger work about Lincoln (I'm actually a historian of 19th century America by training, or at least the only Eric Foner student ever likely to write a textbook history of Nevada).

I also am a board member of The National Museum of Organized Crime and Law Enforcement, better known as The Mob Museum, and hope to work soon on an exhibit for that museum in Las Vegas, and I write for a local weekly (Vegas Seven) and history features for our public radio station ("Nevada Yesterdays" for KNPR).

Oh, and let's not forget my actual job: teaching history as a member of that department at UNLV.