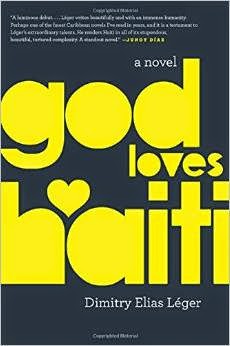 Q: How was the book's title chosen, and what do you see as its significance?
A: I knew I wanted the word “Haiti” in the title. “Haitian Fight Song,” the name of a furious and epic Charles Mingus song, was a working title. Three-quarters into writing, “God Loves Haiti” came to me after I wrote a conversation between two characters talking about redemption. I’m a huge Bob Marley fan, and “Redemption Song” seemed good, but “God Loves Haiti” seemed better, extravagant, and sweetly humorous.
Q: What do you think are some of the most common perceptions and misperceptions about Haiti that people living outside the country have?
A: Haitians are vain, but, like most old countries, we don’t suffer from vainglory. We know we’re not perfect, so the most common perception of Haiti is that it is poor and unlucky, and that is not news to us.
The misperception most common is the assumption that we have nothing positive going for us, as if poverty, bad luck, and poor government are damning failings that deny people the ability to love, laugh, and act the fool. Even I fell prey to the corrosive impact of bummer headlines about Haiti over the decades.
Then I landed in Port-au-Prince while it was in the throes of a national bout of post-traumatic stress syndrome. Once I felt its heat, and saw the square chins of countrymen who dared you to underestimate them, I felt the optimism I always had about Haiti return to me in full force.
Q: What are you working on now?
A: The book tour has been all consuming from three months of preparations to two months of international execution and travel. This winter I’ve been working on sharing my life’s work and greatest joy with all my loved ones in the communities that nurtured me. It’s been wonderful and gave me tons of material for the theme of the next novel.
Q: Anything else we should know?
A: Much as God Loves Haiti is a romantic comedy about what it’s like for hard-luck people, porcupines, to mate and to love a hard-luck place, to me, the novel is as much a referendum on god’s love, since atheists, agnostics, like the faithful, experience bad luck streaks, like good luck streaks, and curse them all the same.
--Interview with Deborah Kalb
Deborah Kalb at 7:54 AM
Share