Mira Jacob is the author of the new novel The Sleepwalker's Guide to Dancing. She co-founded Pete's Reading Series in New York, and she lives in Brooklyn.

Q: How did you come up with the idea for The Sleepwalker's Guide to Dancing?

A: Having come from a crazy family, I wanted to write about one, and specifically about a father who was going crazier than the rest, and receding from them in some way. So I set out to write that book, but in the middle, my father in real life started dying from cancer. The receding became horribly real. Too real, actually--I stopped working on the book for three years while that was happening--but then when I came back, I had a slightly different story to tell.

Q: Why did you decide to tell the story from Amina's perspective? 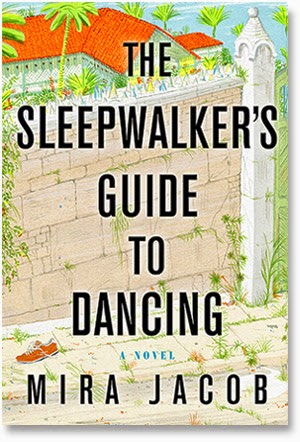 A: When we meet her, Amina is in many ways a failed person--a photographer who took a picture that completely derailed her, and left her outside of her own life. And yet, as things get worse, she actually gets more interesting, more functional, more complicated. So her eyes seemed to be the best to view the story through.

A: I came up with it years ago--maybe eight? It's been called everything from "perfect" to  "lazy," both of which I take as a compliment. (Someone caring enough to have an opinion is a damn good thing, in my book.)

A: You know, that's an answer that varies pretty much from week to week, depending on what I'm working on, so this week I'm going with Antonya Nelson, Sherman Alexie and the poet Joy Harjo.

A: RIGHT now--a short story and a graphic something-or-other. Novel? I don't know. Something or other. Oh yes, and another novel! I'm working on that, too.