Kate Lehrer is the author of four novels, Confessions of a Bigamist, Out of Eden, When They Took Away the Man In the Moon, and Best Intentions. She lives in Washington, D.C.

Q: Your most recent novel, Confessions of a Bigamist, features a woman with two husbands and a very complicated life. How did you decide to write this story, and what do you think it says about the institution of marriage?

A: I like to write about women who play against perceived type. When the idea of a woman bigamist came to me one day, I knew I’d found the protagonist of my next book. Her dilemma would be having to choose between two goods, in this circumstance, two husbands whom she loved.

While I wrote my first draft, the idea of a woman bigamist struck me as fresh and clever. Only after finishing this first go at my story, did I remember Anais Nin, known as a writer and not quite so well known as a bigamist. But I knew her editor and had read two biographies of her. How could I not remember!

Well, if I had, I wouldn’t have started the novel. I wasn’t interested in basing this book on someone else’s real life. Of course, once I remembered, I went back and tipped my hat to her in the book.

I wasn’t so much interested in exploring the institution of marriage as the idea of ambiguity. In this country I think too many of us have come to crave absolutes, which I like as much as the next person, but I think it’s usually a false choice.

The fact is we are always having to make choices by degrees in different ways: security or freedom? Privacy or intimacy? Kindness or truth? Most of us, by necessity, end up a long way from an absolute but that doesn’t stop us from pretending otherwise.

In that context, I think marriage works best when it’s flexible. I don’t mean acquiring two husbands, but in the issues I just mentioned most of us are always adjusting.  We delude ourselves when we start applying absolutes. What I’m saying is that bigamy is as good a metaphor as any to explore the larger question of “good.” Besides, writing about an uptight bigamist was fun. 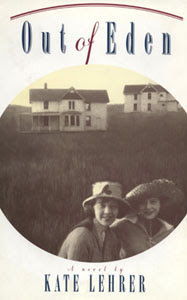 Q: In your novel Out of Eden, you focus on two 19th century women who rebel against societal conventions. What kind of research did you do for the book, and were the main characters based on actual women?

A: The two women characters in Out of Eden are definitely based on real women. When I began, all I knew came from a paragraph about two twenty-something women who built twin houses on the Kansas prairie in 1880. Ten years later someone boarded up the windows and door of one of the homes, and the owner of that house left Kansas forever.

I began telling myself a story of why they had come to such a bad end, as well as why they had gone there in the first place. I began by researching conditions and attitudes in Kansas, one of the few states where women could homestead.

Since I also knew that the real women met in Paris (one was Parisian), I read about conditions there for women. I also got the archived newspapers from the real town (name changed) they settled in. Every day I’d read a day or two of the paper, in and of itself a fascinating effort.

Other reading included books on feminism, on women’s clubs, on Chicago, on trains (a big player in settling the Midwest and West), published and unpublished diaries of pioneer women, even one book on the microclimates in Kansas. For me, research is like eating peanuts. Finally both my husband and my editor had to stop me. 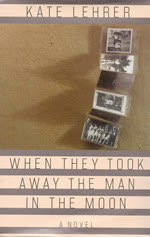 Q: Of the characters that you've created, do you have a favorite?

A: Choosing a favorite character is a hard one.  I’m torn between Michelle, my bigamist and H.A., the protagonist in my second novel, When They Took Away the Man in the Moon. After H.A., a political consultant, sabotages her candidate, she returns to Texas only to grapple with as many complications with her family, friends and old lover as she has left behind on the East Coast.

Q: Your husband, TV anchor Jim Lehrer, also writes novels. How does your writing style compare with his, and do you show each other drafts of your work?

A: Our writing styles are completely different. He is disciplined, more secure about his work, and much, much, much faster. And while his novels are more plot-driven, mine tend to be more character-oriented. 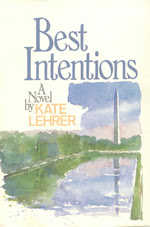 Of course, that statement is a generalization and not always applicable. We do show each other drafts, although not as often as we once did. We tend to show only when we’re having trouble making  a character or situation work or if we’re not sure the book is working at all.

A: I’m working on a book about a young, successful woman who, through a variety of circumstances, finds herself out of a job and then, in an emotional meltdown. Enter her dysfunctional – as she sees them – family.  I hope it is half as funny as I now think it is.  I also hope the serious points come across to readers.

A: Only that I’m excited about the book after the one I’m writing now and the one after that. In the past I have not been given to so many ideas at one time.  I am grateful!