Martha Moody is the author of four novels, Best Friends, The Office of Desire, Sometimes Mine, and most recently Sharp and Dangerous Virtues. Trained as a physician, she worked as an internist for 15 years. She lives in Dayton, Ohio.

A: I live in a suburb of Dayton, Ohio. In 1998 I was an internist in private practice, married with four young sons. I was driving home from the supermarket one day when I “saw” tanks coming down a residential street. I’m not a visionary, so this got my attention. At the time I was reading Dayton history and thinking about water, and these things seeped into my imagination.

Yes, this book is a departure. Usually I write about relationships and families. My genre is “upmarket women’s fiction.” I really wrote Sharp and Dangerous Virtues for my four sons. Midway through the first draft, in 2001, I had some health issues, and at that point I decided that I’d write as big and ambitious a book as I could (my thought was:  I need to write like I’m a young man) and not care if it ever got published, because, if anything happened to me, my sons could one day find the manuscript in the back of my closet and think: Mom thought about these things. 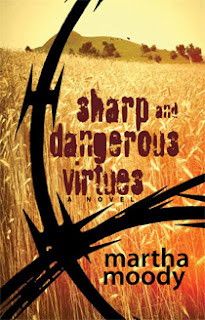 A: The basic premise of the novel is “If a war was threatening your town, what would you do?” When I started on it I’d been reading young adult books (such as The Ear, the Eye, and the Arm by Nancy Farmer) that use speculative situations to present and discuss ideas. I was a little envious that authors in the young adult market had the freedom to imagine and publish such things!

I do like science fiction that feels exploratory and not didactic, but I’m not a very big reader overall. I don’t like to read fiction when I’m writing, because I’m worried someone else’s tone will creep into my work; and, dang it, I’m always writing. Margaret Atwood I enjoy a lot, and my sons have several other speculative writers on lists for me.

Q: How did you come up with the characters and the geopolitical problems in Sharp and Dangerous Virtues?

A: Here’s the basic set-up of Sharp and Dangerous Virtues: The novel starts in 2047 in Dayton, Ohio. The U.S. is a weakened country overall, and 13 years before, in response to a massive famine, the federal government appropriated a large swathe of land across several states to make a dedicated agricultural area called the “Heartland Grid.” Dayton lies just south of the Grid. 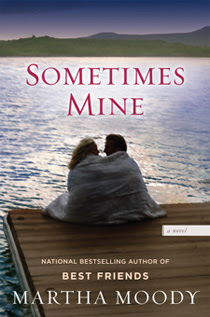 The Grid has worked beautifully in producing food, but now the Grid is threatened from the north by a multinational force, and the American government is increasingly worried about the allegiance of the Gridians, who have become isolated and suspicious of outsiders.

What I can recall about thinking these things up:

--The Grid is basically an effective satellite office, cohesive and proud but full of mistrust and resentment toward the “main office”—which in the book is the rest of the country.
--Northern Ohio and Indiana and Illinois are (in real life) fertile areas scraped flat by glaciers and blessed with plenty of water.  Also, this area generally is not rich in political power, so it made sense to me that this area could be taken over for other purposes.
--Dayton history is full of driven and difficult characters (such as the Wright Brothers and John Patterson of National Cash Register) who changed the world by dint of perseverance, ambition, audacity, and skepticism—virtues that today aren’t necessarily taken as Midwestern.  But those are ambitions I’d love my sons to have. 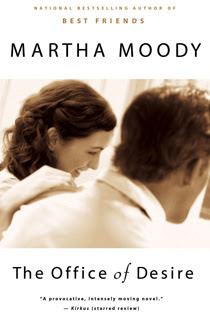 Characters: I never know where my characters come from—they’re not based on anyone I know, although I’m sure I have subconscious influences. I have some basic ideas of what I want to write about, and the characters wander in. It takes me a long time to feel like I “know” a character, but once I do he or she sort of writes themself.
I knew I wanted to write about yearning, and the first character that came to me was Lila, the local water commissioner.  Lila is an aging lonely lesbian who misses the influence and fame she once had. As the story goes on she yearns to attach herself to something she sees as big and worthwhile--the Grid.  Her last stand, in a way.

I wanted a basic nuclear family in the book. That’s Chad and Sharis and their two sons. Chad is a Daytonian and a professor who teaches about the history of Dayton. I use him both to present Dayton history to the reader and to represent a hopeful person with a strong (irrationally strong?) attachment to his community. Sharis, his wife, had been made a refugee by the Gridding; she gives the reader another part of the Grid story and serves as a contrast to Chad’s optimism. As the risk of war progresses, she wants to get out.

The people who really get hurt by history seem to be people with no power. I wanted to present someone powerless and basically good—that’s Tuuro Simpkins, a church custodian who finds the body of a murdered boy. What he’s really searching for isn’t even respect, but a basic acknowledgment by others that he is a decent person. Tuuro still haunts me.

Q: You worked for many years as a doctor. How does that background inform your writing? 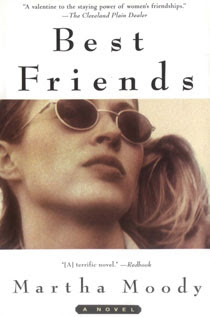 A: Medicine calls for a combination of intimacy and distance.  What I seem to be known for is imperfect, realistic characters that readers either appreciate/recognize or can’t stand—and those characters seem real to me, because as a doc you’re lucky enough to see people in all kinds of situations, and not always at their best. So I’m perversely happy if a reader gets furious at one of my characters—that makes me think I’ve hit a nerve.

On the other hand, the strength and grace and compassion I saw in people as a doctor just amaze me. I had a patient (now a friend) who had six-inch-long spinal cord tumor that paralyzed her from the waist down. A year after it was resected she held a party for everyone involved in her care (think about that) and at the end of it she stood up and danced a polka! What a glorious moment:  it’ll be with me always.

A: Right now I’m re-re-revising a manuscript called My Family, Yours. It’s a novel about two families joined by marriage; the two narrators are an old woman and the young woman that her grandson marries. The young woman gets sick, and everyone has to deal with that. I think of this novel as the luminous counterweight to the darkness of Sharp and Dangerous Virtues.

What interests me these days are the vagaries and mysteries of healing. Falling apart is pretty predictable; healing is individual and prone to serendipity and very, very strange. When do I feel calmest and most clear? After a weekend spent carting things around in a cave. I can’t explain that.

A: Since Sharp and Dangerous Virtues is about war and I understand that war is random (although I’ve never been in one) I put all the names of the characters in a paper bag halfway through writing the book and had my sons each pull names out.  The names left in the bag were the characters who’d die. And that’s what happened. I’m not sure if that makes for the most satisfying read, but I felt like it was true to the chanciness of the book’s world.